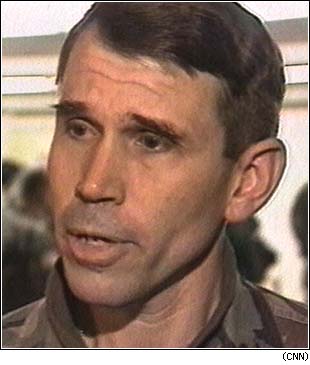 I don’t usually re-post what other bloggers have posted but this is something special. It is a note from General Batiste. He has been outspoken against the tactics of the Bush Administration. He called for Rumsfeld to be fired. He submitted this to the WSJ and the Washington Times. They didn’t publish it. This was posted by our friends at Think Progress, one of the greatest blogs on the planet.

For my first post here at ThinkProgress, I thought I would share something a little different from what you usually read here — something from a conservative perspective. I think this is especially fitting, given the new poll of foreign policy experts by Foreign Policy Magazine and the Center for American Progress, which shows 64 percent of conservative analysts feel the so-called “surge” in Iraq is having no impact, or a negative effect.

The following is an op-ed I wrote two weeks ago, which neither the Wall Street Journal or Washington Times wanted to consider, so I’m posting it here…

Over a year and a half ago, I made a gut-wrenching decision to leave the Army in order to speak out about the war in Iraq. I turned my back on over 31 years of service and what by all accounts would have been a great career. I realized that I was in a unique position to speak out on behalf of Soldiers and their families. I had a moral obligation and duty to do so. My family and I left the only life we knew and entered the political debate. As a two-time combat veteran, I understand the value of thorough planning and deliberate execution. I understand what it takes to win. As a life-long Republican, I am prepared to carry on with the debate for as long as necessary. I have been speaking out for the past 17 months and there is no turning back.

As a conservative, I am all for a strong military and setting the conditions for success. America goes to war to win. I am not anti-war and am committed to winning the struggle against world-wide Islamic extremism. But, I am outraged that elected officials of my own party do not comprehend the predicament we are in with a strategy in the Middle East that lacks focus and is all but relying on the military to solve the diplomatic, political, and economic Rubik’s Cube that defines Iraq. Our dysfunctional interagency process in Washington DC lacks leadership and direction. Many conservatives in Congress have allowed the charade to go on for too long. END_OF_DOCUMENT_TOKEN_TO_BE_REPLACED

VoteVets.org is an organization that is trying to get more veterans elected to office. In the short term they are trying to stop the War in Iraq. They are targeting venerable republicans and running these ads. The strategy is sound. This is a good segment.

General Batiste was a consultant for CBS but CBS fired him for these ads. Their “official” answer was kinda weak.