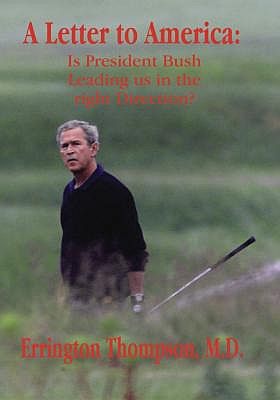 ASHEVILLE, North Carolina – In a book that serves as both a commentary on the state of affairs in American politics and a look at how the political climate fits into the nation’s history, Errington Thompson, M.D., provides a series of letters that touch on everything from the environment to terrorism in A Letter to America: Is President Bush Leading us in the Right Direction? (now available through AuthorHouse, BN and Amazon).

An analysis of George W. Bush’s presidency thus far, A Letter to America is a broad, retrospective look at executive decisions and their respective results. Written in a non-abrasive tone, the book encourages “neighbors and friends” to look more deeply into the issues that most interest them. Thompson offers a list of 10 different topics and pulls pertinent information from hundreds of sources to present an informative base of facts, to which he adds commentary and thought-provoking questions.

His work is a wake-up call to citizens and suggests ways that all Americans might monitor their government’s handling of key issues in the future. Although his commentary is at times critical of the president’s actions, his suggestions for moving the U.S. government toward a better future are bipartisan and insightful.

A Letter to America is a well researched commentary on how the current administration is leading the country and how the president’s actions affect each citizen.

Thompson, a surgeon, is the associate director of trauma/surgical critical care in Asheville, North Carolina. His profession allows him to see the real-life, physical affects of government policy, which gives him a unique perspective on current issues. He attended Emory University and Southwestern Medical School in Dallas, where he was raised. He received further training at hospitals inShreveport, La., and St. Louis. Although he has written more than 20 professional articles and book chapters, A Letter to America is his first non-medical book.