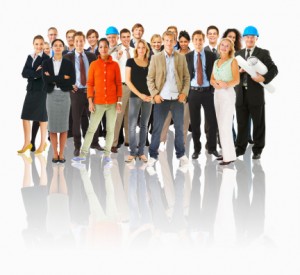 I wish I had something new or different to say about the jobs report. I don’t. I’m happy that the economy is adding hundreds of thousands of jobs, but we still need more. We have millions of Americans who are out of work. We need more.

Total nonfarm payroll employment rose by 217,000 in May, and the unemployment rate was unchanged at 6.3 percent, the U.S. Bureau of Labor Statistics reported today. Employment
increased in professional and business services, health care and social assistance, food services and drinking places, and transportation and warehousing.

The unemployment rate held at 6.3 percent in May, following a decline of 0.4 percentage point in April. The number of unemployed persons was unchanged in May at 9.8 million. Over the year, the unemployment rate and the number of unemployed persons declined by 1.2 percentage points and 1.9 million, respectively. (See table A-1.)

Among the unemployed, the number of job losers and persons who completed temporary jobs declined by 218,000 in May. The number of unemployed reentrants increased by 237,000 over the month, partially offsetting a large decrease in April. (Reentrants are persons who previously worked but were not in the labor force prior to beginning their current job search.) (See table A-11.)

Today’s jobs report was, to say the least, strange. The first look was exciting—288,000 payroll jobs added! Now that is the kind of job growth that would get us back to a healthy labor market relatively soon. If we were to keep up this pace, we would get back to pre-recession labor market conditions by the end of 2016. Even I could live with that.

The second look was good, too—the household survey showed the unemployment rate plunged to 6.3 percent. But I should have stopped looking there, because the rest was pretty bad. It turns out the drop in unemployment was entirely due to people dropping out of the labor force. Employment in the household survey actually declined, and the labor force participation rate fell back down to its lowest point of the recovery. Our estimate of the number of “missing workers” (workers who are not working or actively seeking work but who would be if job opportunities were strong) increased to an all-time high of 6.2 million. If those missing workers were in the labor force looking for work, the unemployment rate would be 9.9 percent instead of 6.3 percent.

END_OF_DOCUMENT_TOKEN_TO_BE_REPLACED

So all of the doom and gloom over the economy we saw earlier this week seems to be over nothing. The jobs report is better than expected.