Summary: the MSM hasn’t really reported this yet and I don’t know if it is true. I don’t have any contacts inside Bank Of America but this looks like something that corporate America would do. There used to be shame in laying off people. Not any more.  Reagan changed that. Now Wall Street wants and expects a company to trim the fat. 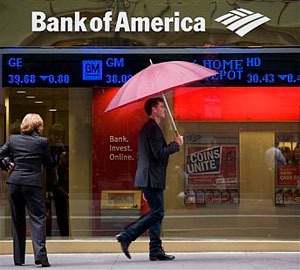 I just got a call from a friend who works in HR at Bank Of America in Delaware. I wanted to diary this to add to the list of ‘outrages’ perpetuated by this bank. Just to clarify, they did nothing illegal. Just crappy. And it was probably naive of people to continue to work for a company based on what’s been said as supposed to written contracts.

Today was a big layoff day for Bank Of America, but the media hasn’t yet reported it. I will update this as soon as they do. (UPDATED BELOW) I don’t have an exact number of the jobs lost today, but as soon as I get a number I’ll post. I’m hesitant to guess at this point, as they are still in the process of letting people go until tomorrow.

So what makes this more cruel than their usual layoffs?

When Bank of America absorbed MBNA into it’s organization, they gave away three year protection packages to long term and high ranking employees here which meant that if they were laid off within that three year period, they would gain an additional one month to a year of severance.