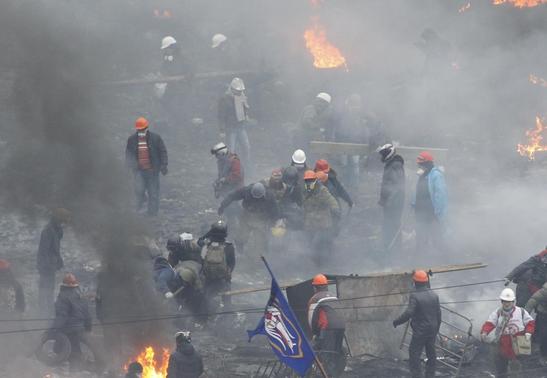 I’m not going to pretend to understand the ins and outs of Ukrainian politics. All I can say is that it is really getting ugly in Ukraine.

Just hours after a truce was declared, clashes between anti-government protesters and security forces have broken out again in Ukraine’s capital.

By early afternoon Thursday in Kiev, at least 21 civilians had been killed, Reuters reports. Those deaths followed the 25 or so fatalities earlier in the week.

From near the city’s Independence Square, NPR’s Soraya Sarhadi Nelson reported on Morning Edition that it’s “absolute chaos” in the area. She’s seen numerous people carried away on stretchers — one person completely covered by a sheet. Small explosions can be heard. Protest leaders are warning there are snipers on rooftops. The opposition appears to have retaken control of the October Palace, a historic building that’s now a cultural center. Smoke is rising over the city.