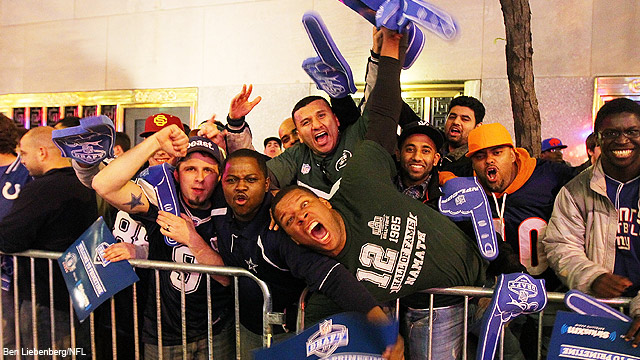 Nowhere else do you see this type of unbridled craziness. You can only find it in the NFL. It is only in the NFL that you take a veteran quarterback like Peyton Manning and actually release him. The craziness of this particular move can only be understood if you’re both drunk and high or a delusional NFL football fan. Every year, for the last 10 or 15 years, right around draft time, people lose their minds. NFL fans, NFL owners, Scouts, everybody starts scrutinizing these young athletes. Everybody starts projecting their own hopes and wishes on these athletes.

The fact that the NFL combine is televised is simply crazy. It’s not just kind of crazy. It’s over-the-top nuts. Let’s just think about this for half a second. I’m supposed to spend some time sitting down watching these young athletes basically do calisthenics. Why? I don’t see how these “tests” translate into the ability to learn how to play in the NFL. If these tests were so good, if these tests were so accurate, why did Tom Brady fault of the sixth round of the NFL draft? Blaine Gabbert, how did he get drafted in the first round? END_OF_DOCUMENT_TOKEN_TO_BE_REPLACED

We discuss AVM’s (arterial venous malformations) and recovery from this type of brain surgery.  This interview aired on my Show earlier today.

Forty years after it was made, The Velvet Underground’s first recording has become a financial hit — in cyberspace.

Bought for 75 cents four years ago at a Manhattan flea market, the rare recording of music that ended up on the influential New York band’s first album, “The Velvet Underground & Nico,” sold on eBay for a closing bid of $155,401.

The buyer is a mystery, only identified by the eBay screen name: “mechadaddy.”

But a greater mystery endures: How did the 12-inch, acetate LP end up buried in a box of records at a flea market? more

My luck I would see the LP and think it was some type of China copy and would have put it back.