Garth Brooks was on a roll like no other country western singer. He had crossed over into pop. He was making money by the truckload. He had very catchy tunes which could appeal to almost everyone but the most heavy of metalheads. Then something happened. He got weird. He changed his name. He was in an affair. A country western singer, with a spit-and-polish image, in an affair? That’s the kiss of death.

Many people in the United States are anxious, nervous and upset. Some of them manifest their anger in outward displays like Tea Parties. Others keep their anger and frustration all bottled up inside. The question is what is causing all of this angst. Millions of Americans are out of work. Many of those jobs have been lost to China, Mexico or Taiwan. A lot of those jobs are never coming back. Well, who’s to blame for jobs being shipped overseas and companies moving to Singapore and Indonesia? Is President Obama to blame? Are liberals?

The fact that Republicans and Democrats set up a system that allows such gross excess makes them both equally culpable. We just underwent the hugest financial disaster since the Great Depression. Why? Because regulations were systematically removed, destroyed and blown up. We needed to “free up” the markets. Incentives for outlandish behavior became the norm and not the exception. The big banks and investment houses thought that making money by the truckload was not enough. They needed to make more, so they rigged the system. They sliced and diced mortgages and others assets and then packaged them in these derivative packages. They went to the rating agencies and showed these agencies how to rate the commodities they just produced. AAA ratings rolled out of these companies like water flowing at an oasis in the desert. Securities that were highly risky or just plain garbage were somehow labeled as AAA after being repackaged. Because they had the AAA rating they were bought up by mutual funds, pension funds and municipalities. They crashed, not because some act of God, but because the fundamentals of the market were wrong. They were not AAA rated bonds. They were garbage. They were extremely highly risky derivatives. Put another way, it’s like building a straw house in the middle of Tornado Alley in northern Texas. Yes, it’s cheap to build a straw house, but the house will collapse as soon as a thunderstorm comes around. In North Texas they come around all the time. So, it is only a matter of time before the whole thing comes down. This was/is our financial system.

In my mind, setting up a system that you know is going to fail is immoral. But what is even worse is that the system is self-perpetuating. Wall Street set up a system in which those who are making money are rewarded for making money. They aren’t rewarded for long-term growth or stability. Instead, they are rewarded for meeting short-term goals of the Wall Street analysts. This is the problem. This is why you have somebody like Angela Braly, CEO and president of WellPoint Insurance getting a raise of over $5 million to $13.1 million a year in compensation. CEOs are bathed in money. If you’re a bad CEO you get paid and get fired. On your way out the door you grab your golden parachute. There’s no way to lose; hence the problem on Wall Street — we can lose billions of dollars but those taking stupid risks and those who are failing in their jobs still get paid. Now, tea partiers, this is something to get mad about. Where are your protests? You should be protesting the CEOs who have set up this system where the average guy doesn’t get a break no matter how smart he is. These are the guys who are stealing our country.

So how do we fix this? First of all, it must be stated that I have no objections to people making money. If you invent something that everybody uses and it just takes off like wildfire (Cabbage Patch dolls, pet rocks, Microsoft Windows), then you deserve to make all the money you can from your invention. On the other hand, if you’re just moving money around and you really haven’t invented anything, are you really worth $13 million per year? If companies would pour more money into their workforce and less money into their CEOs, salaries would increase. Salaries have been stagnant for almost a decade now (another source of angst). Secondly, we can’t have institutions that are too big to fail. I have no idea how to put a cap on an institution’s size or what that would even look like, but I think we need to figure it out. Small institutions will have less influence over rating agencies. Small institutions can fail for stupidity and setting up straw houses. This is a start, but what am I missing? What else do we need to put in this equation?

Tiger gets back in the game 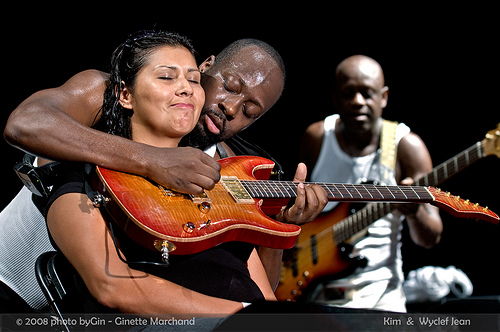 Looks like Tiger Woods is going to donate a truckload of money to Haiti. (BTW, I didn’t know that Russell Simmons was a rap icon. You learn something new everyday.) This is a great way for Tiger to help those that really need help and help himself.

Tiger Woods is considering a $3 million donation that would send doctors and supplies to Haiti, rap icon Russell Simmons told the Daily News.

“Tiger Woods is working on sending a mobile hospital with 50 EMTs to go set up a triage,” Simmons said Wednesday night.

Simmons and representatives from Wyclef Jean‘s Haitian relief organization Yele have asked Woods to support the effort. Simmons spokesman has been in touch with Woods managment team and they are “excited” about the idea. (more…)