Chicago Tribune Stands by Their Endorsement 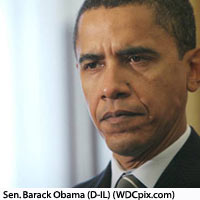 In a lengthy article, the Chicago Tribune focused on a discussion that three dozen journalists had with Barack Obama last Friday. This article completely refutes the petty argument that some Democrats have thrown at Obama: He has not been vetted.

The Chicago Tribune goes into great detail about their 12 year history with Obama. This was not a 10-minute ‘hi-and bye’ but a 92-minute discussion. All questions were answered.

Let me repeat: According to the Chicago Tribune, all questions were answered.

This is an extraordinary undertaking for any politician and, in my opinion, Obama is to be commended for his efforts in being forthright.

I do understand that no matter what Obama does or what he says, it will never be good enough for some people. That is just the way life goes sometimes.

TPM Muckraker has some additional points on this subject.

When we endorsed Obama for the Democratic presidential nomination Jan. 27, we said we had formed our opinions of him during 12 years of scrutiny. We concluded that the professional judgment and personal decency with which he has managed himself and his ambition distinguish him.

Nothing Obama said in our editorial board room Friday diminishes that verdict. END_OF_DOCUMENT_TOKEN_TO_BE_REPLACED