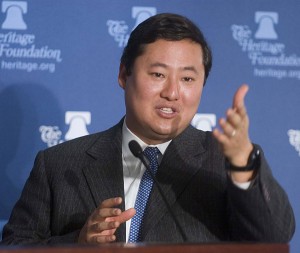 The case against John Yoo, the Bush Administration Justice Department attorney who crafted the “torture memos”, was thrown out of the ninth Circuit Court. In my opinion, this deserves more discussion.

The Ninth Circuit today reversed the district court’s ruling in Padilla v. Yoo, ordering that former “enemy combatant” Jose Padilla’s civil damages suit against John Yoo be dismissed on qualified immunity grounds. The dismissal represents the latest refusal of a federal court to provide a remedy for abuses committed during the war on terrorism. END_OF_DOCUMENT_TOKEN_TO_BE_REPLACED

I’m going to have a lot more to say on this a little later (see below). John Yoo was the architect of the Bush administration’s torture memos. He was inside the office of legal counsel along with David Addington, Vice President Cheney’s legal council, were the ones who came up with the idea of unlimited presidential power during war time and torture.

While I’m bumbling and stumbling over how to describe John Yoo, Glenn had no trouble laying out Yoo’s crimes and the administrations misdeeds. I’m a little disappointed in this interview. Although Stewart tried, he was unable to corner Yoo. Here’s part 2 of the interview.

(1) The fact that John Yoo is a Professor of Law at Berkeley and is treated as a respectable, serious expert by our media institutions, reflects the complete destruction over the last eight years of whatever moral authority the United States possessed. Comporting with long-held stereotypes of two-bit tyrannies, we’re now a country that literally exempts our highest political officials from the rule of law, and have decided that there should be no consequences when they commit serious felonies.
(2) While Yoo’s specific Torture Memos were ultimately rescinded by subsequent DOJ officials — primarily Jack Goldsmith — the underlying theories of omnipotent executive power remain largely in place. The administration continues to embrace precisely these same theories to assert that it has the power to violate a whole array of laws — from our nation’s spying and surveillance statutes to countless Congressional oversight requirements — and to detain even U.S. citizens, detained on American soil, as “enemy combatants.” So for all of the dramatic outrage that this Yoo memo will generate for a day or so, the general framework on which it rests, despite being weakened by the Supreme Court in Hamdan, is the one under which we continue to live, without much protest or objection.
(3) This incident provides yet more proof of how rancid and corrupt is the premise that as long as political appointees at the DOJ approve of certain conduct, then that conduct must be shielded from criminal prosecution. That’s the premise that is being applied over and over to remove government lawbreaking from the reach of the law.

The DOJ is not the law. They are not above the law and they do not make the law. They are merely charged with enforcing it. The fact that they assert that blatantly illegal conduct is legal does not make it so. DOJ officials, like anyone else, can violate the law and have done so not infrequently. High DOJ officials — including Attorneys General — have been convicted of crimes in the past and have gone to prison.

(4) Since the Nuremberg Trials, “war criminals” include not only those who directly apply the criminal violence and other forms of brutality, but also government officials who authorized it and military officials who oversaw it. Ironically, the Bush administration itself argued in the 2006 case of Hamdan — when they sought to prosecute as a “war criminal” a Guantanamo detainee whom they allege was a driver for Osama bin Laden — that one is guilty of war crimes not merely by directly violating the laws of war, but also by participating in a conspiracy to do so.

Jon Stewart took a moment at the start of last night’s Daily Show to reflect on his frustrating interview with former Bush Department of Justice lawyer and ‘torture memo’ author John Yoo.

“I was gonna nail him baby, eeeee…. slipped right through my fingers,” confessed Stewart. “It was like interviewing sand. … You set that hook, you know what I mean? You think you got something going, you set the hook, and you’re expecting a little fight, you’re gonna pull back on the marlin, and you’re gonna reel it in, and basically though you look over and he’s just lying on your boat back like this, and then you don’t know what the f*ck to do. So uhh, he got me.”

Now, this is good stuff.

My special guest is Marcy Wheeler who scooped the mainstream media I actually reading the torture memos. She was one of discovered that Khalid Shaikh Mohammed was waterboarded over 100 times. I discussed with my producer, Agnes, who’s back from a long hiatus, the importance of people being involved in the government.

Marcy Wheeler and I go into some detail about the torture memos. This should not be missed. Abu Zubaydah and Khalid Shaikh Mohammed.

From the Bybee memo:

Our advice is based upon the following facts, which you have provided to us. We also understand that you do not have any facts in your possession contrary to the facts outlined here, and this opinion is limited to these facts. If these facts were to change, this advice would not necessarily apply.  Zubaydah is currently being held by the United States.  The interrogation team is certain that he has additional information that he refuses to divulge.  Specifically, he is withholding information regarding terrorist networks in the United States or in Saudi Arabia and information regarding plans to conduct attacks within the United States or against our interests overseas.  Zubaydah has become accustomed to a certain level of treatment and displays no signs of willingness to disclose further information. Moreover, your intelligence indicates that there is currently a level of “chatter” equal to that which preceded the September 11 attacks. In light of the information you believe Zubaydah has and the high level of threat you believe now exists, you wish to move the interrogations into what you have described as an “increased pressure phase.'”

We spend some time discussing this paragraph.  It is very important.  I think that it shows, since none of the criteria were met, that even under the Bush torture memos, we violated even that standard.  This is a great interview.  enjoy!