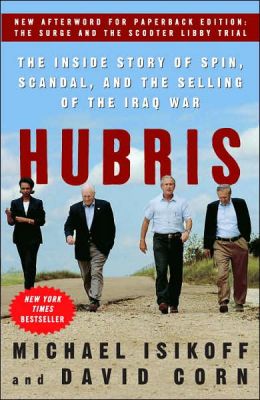 (…with Rachel Maddow talking about the book Hubris. I thought I would re-post an interview that I had several years ago with one of the co-authors of that book, Michael Isikoff.)

I start off the show with a remembrance of Molly Ivins. (Molly Ivins on PBS.) She was a unique voice. I will miss her. The Texas Observer has turned their whole web site over to remembering Molly Ivins.

School is in. Let’s review what we know about the CIA leak case. Cheney and Libby are regularly going to the CIA to review the intelligence. He asks the CIA to follow up on this Niger claim. Joe Wilson goes to Niger. One of the things that I don’t mention on my show is that there is a reason that Joe Wilson is sent. It is not because he was Valerie Plame’s husband. He is a former ambassador to Niger. He knows the country, has contacts in the country. He understands how uranium is mined and how it is controlled by the French government. This is important. I go through the timeline of major stories on the Niger yellowcake deal and when government officials talk to reporters (I have a table here.) The New York Times has a great timeline and the Washington Post has a great one. END_OF_DOCUMENT_TOKEN_TO_BE_REPLACED