Senator Coburn – Same As It Ever Was 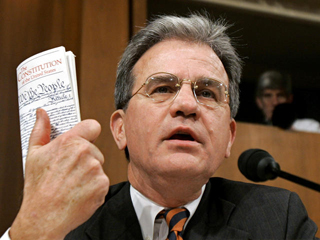 Yesterday, while on Face the Nation, Senator Tom Coburn of Oklahoma began whistling the same old tune. A new devastating tornado, must demand budget cuts before disaster relief. Senator Coburn has been a vigorous supporter of offsets for disaster relief funding. Senator Coburn is living that old Talking Heads tune which has the refrain – Same As It Ever Was. Senator Coburn is again whistling the same tune. I guess this is probably a good thing. At least he’s been consistent. He is treating his own state exactly the same as he treated other states when they needed disaster relief, although I’m not sure it’s a good thing when you are cold and callous.

We all pay taxes. The taxes need to go for something. One of the problems that I have with the current “cut taxes culture” is that we don’t think about what the things are that we really want to pay for. Do we really want to pay for the F-22 Raptor? If so, this a plane that cost tens of millions of dollars apiece. Do we want to pay to upgrade our bridges that seem to be collapsing at an alarming rate? Do we want to pay for disaster relief for the floods in San Antonio? The tornadoes in Moore, Oklahoma? Hurricane Sandy that hit New Jersey and New York? If so, we need to quit cutting taxes and start paying for some things.

“We’ve created kind of a predicate, that you don’t have to be responsible for what goes on in your state,” he said on CBS’ “Face the Nation” while discussing the success Oklahoma has had in using state and private funds after the tornadoes.

Coburn said he doesn’t oppose any federal money going toward the state, however.

“Big storms like [Hurricane] Sandy, or like this tornado — there’s certain things that we can’t do that we need the federal government to do,” he said.

Rescue teams combed through pulverized buildings and splintered homes early Tuesday after one of the deadliest tornadoes in U.S. history blasted through the suburbs of Oklahoma City, killing at least 51 people — including 20 children.

Officials warned that the death toll from Monday’s mid-afternoon twister was almost certain to rise significantly when dawn broke in the devastated city of Moore, and as more bodies were taken to the Office of the Medical Examiner. Elementary school children were among the many missing. END_OF_DOCUMENT_TOKEN_TO_BE_REPLACED

A massive tornado that tore through the southwest Missouri city of Joplin killed at least 89 people, but authorities warned that the death toll could climb Monday as search and rescuers continued their work at sunrise.

City manager Mark Rohr announced the number of known dead at a pre-dawn news conference outside the wreckage of a hospital that took a direct hit from Sunday’s storm. Rohr said the twister cut a path nearly six miles long and more than a half-mile wide through the center of town, adding that tornado sirens gave residents about a 20-minute warning before the tornado touched down on the city’s west side.

Much of the city’s south side was leveled, with churches, schools, businesses and homes reduced to ruins.

Fire chief Mitch Randles estimated that 25 percent to 30 percent of the city was damaged, and said his own home was among the buildings destroyed as the twister swept through this city of about 50,000 people some 160 miles south of Kansas City. (more…)

The tornado, estimated to be an EF4 by the National Weather Service, tore a six-mile-long path from one-half to three-quarters of a mile wide through the middle of Joplin on Sunday. Much of the city’s south side was leveled, with churches, schools, businesses and homes reduced to ruins by winds estimated as high as 190 to 198 mph. Officials have estimated 2,000 buildings were damaged.

Rescuers have made three sweeps, block by block, in their search for survivors. Authorities have not released names or other details of the victims.

“There are going to be some things out there that are hard to see and hard to stomach,” Nixon said.

“We’re going to cover every foot of this town to make sure every person here, who was here, is accounted for,” Gov. Jay Nixon said. “…There are still lives out there that need to be saved.”

The death toll from Sunday’s tornado is now 116, city officials said this afternoon, with an estimated 400 injured. (more…)