I was standing in AT&T stadium watching an amazing thing. All year, I have been sitting in wonder as I watched the Cowboys. I have been waiting for the Dallas Cowboys to unwind, unravel and implode. On Thanksgiving Day, the Cowboys did collapse as promised. The Philadelphia Eagles ran all over the Cowboys. Mark Sanchez looked like a pro bowl quarterback. Tony Romo was truly awful on Thanksgiving and he said as much. He promised that he and the Cowboys would play better.

Lo and behold, the Cowboys have played better. They flew to England and took can of business against the lowly Jacksonville Jaguars. They then played the Eagles again with a much better outcome. This Eagle game was critical. The Cowboys got off to a fast start and then allowed the Eagles back in the game. Mark Sanchez and the Eagles had two of those fast paced patented Eagle drives that ended in touchdowns. Then, and this is key, Romo held the ball for far too long and gave up a sack-fumble. The Eagles scored another touchdown. The Cowboys, when faced with adversity like this in the past, have rolled over and played dead. Not this team. The Cowboys re-grouped and decided to play a little more football. They scored points. The defense pressured and sacked Sanchez. Instead of rolling over, they played their best football of the game. I was amazed. END_OF_DOCUMENT_TOKEN_TO_BE_REPLACED

Cowboys lay an egg in week 8 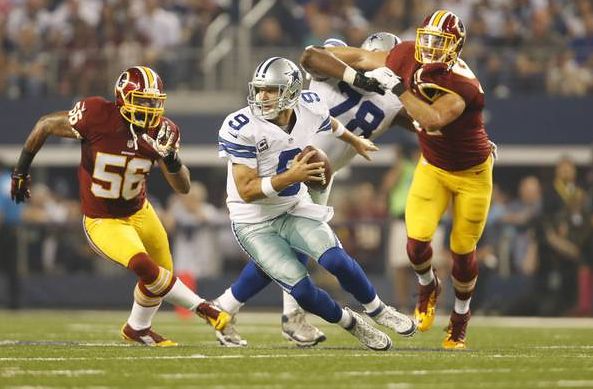 So, everyone had jumped on the Cowboy bandwagon. They had been ranked near the bottom of the league in week 1. In week 7, everyone was drinking the Kool-Aid. SI had Dallas ranked 1 and NFL.com had the Cowboys ranked 2. Not in the division or in the conference, but in the league. I said that the Cowboys still had some huge problems. I didn’t understand how the defense was working. McClain was playing out of his mind. The corner backs and safeties were playing way above their pay grade. Then came the lowly Washington Dudes (I’m refusing to use that R-word. I know it is insulting. We need to move beyond it) who didn’t believe the craziness.

To describe the Washington team as having issues would be an understatement. Quite frankly, they have been awful with a capital “A.” They were still awful when they played the Cowboys. They made just about every mistake that you can make. Critical, thoughtless drive-killing penalties. A 3rd string QB who should be coaching some high school team threw a knucklehead interception into double or triple coverage. It wasn’t just a poor decision. It was a terrible moonball throw which any high school corner back could have gotten under.

The Cowboys lost this game for 3 reasons. First, DeMarco Murray put the ball on the ground for the 5th time this year. We had driven deep into Washington territory. We were going to get at least 3 points. He was fighting for a couple of extra yards and 15 or 20 (seemed like the whole team) of the Washington Dudes were holding him up and stripped the ball. There is no excuse. You can’t fumble. Emmitt Smith was great for a number of reasons, one of the primary reasons being that he didn’t fumble the ball. Secondly, the Cowboys defense was awful. They gave up over 400 yards of total offense to a Washington team without Robert Griffin III. That’s just crazy. DeShawn Jackson torched the Cowboys with not one or two, but three big plays. I have to mention Jordan Reid was just about unstopped on short yardage plays. Everyone knew Colt McCoy was going to throw to Reid, but we didn’t stop it. Finally, our much heralded offensive line couldn’t figure out how to block an all out blitz. So, Washington used it time and time again. There was nothing fancy. It was everyone…. At the line of scrimmage…  everyone was coming or everyone was dropping into coverage.  DeMarco Murray missed blitz pick-ups at least twice. Dez Bryant needed to win this one on one match up with a 4th round draft pick rookie, Breeland, who played like a first round draft choice. Bryant had to win that battle but he didn’t.

Many people are getting all caught up in the argument on whether or not to put Tony Romo back in the game or not. I don’t think that it matters. The problem wasn’t Tony. The problem was Dez, the offensive line and our defense.

Look for the Cardinals, who have much better corner backs, to blitz early and often. Until the Cowboys have proven that they can handle the blitz, look for the NFL to blitz on just about every passing down.

Last week, I had to talk some of my friends down from Dallas Cowboys euphoria. The Dallas Cowboys were 5-1 and had just beaten the Super Bowl champions, the Seattle Seahawks. Many Cowboy fans could not contain their glee. Look, I’m a Dallas Cowboys fan. I’ve been a Dallas Cowboys fan since 1966 when I went to my first Dallas Cowboys game back in the Cotton Bowl. Collectively, we need a group hug. We also need to remember that the Dallas Cowboys have let us down time after time… after time. We’ve seen the Dallas Cowboys go 8-8 over the last three years. In the four years that Bill Parcells was the head coach of the Dallas Cowboys, we lost in the wild card game twice and didn’t make it to the playoffs twice. We’ve seen November/December collapses from the Cowboys on numerous occasions. Our best season in the last decade was in 2007. We had Tony Romo, Marion Barber, Terrell Owens and a host of offensive weapons. We controlled the ball. We held Eli Manning to only 163 yards passing. Yet, somehow, we lost that playoff game. This was our last, best chance to get to the Super Bowl. If you remember, that team was 13-3. They were favored to beat the Giants.

Fast-forward to yesterday. This wasn’t simply another hard-fought divisional game, but unlike what we saw in the last two or three years, the Dallas Cowboys have proven (gulp) that they can overcome adversity. After going up 7-0, the Dallas Cowboys fell behind 14-7. The defense, which I’ve been worried about all year, again proved to be porous at best. It seems that every other play there was a flag for defensive pass interference or illegal contact. We generated absolutely no pass rush. We had no sacks. Not one! Eli Manning was 21 of 33 for 248 yards and three touchdowns. He had no interceptions.

The New York Giants played the run. It was tough sledding for DeMarco Murray. Yet, once again, the Cowboys stuck with a run and were rewarded in the fourth quarter. (Congratulations to DeMarco Murray for 7 straight games with over 100 yards, breaking Jim Brown’s mark of 6 games.)

Eli Manning made his typical come-from-behind charge in the fourth quarter. For those of us who are longtime Cowboy fans, we’ve seen Eli Manning look terrible for 3 1/2 quarters and then shred the Dallas Cowboys defense for a victory. The Dallas Cowboys won this game in the fourth quarter. They were up 28-21 with 5:28 left in the fourth quarter. Eli Manning and the Giants just scored quickly on 11 play drive in which the Dallas Cowboys defense looked completely hapless. Now, the Dallas Cowboys offense needed to seal the game. This is where we’ve failed, time and time again, in past seasons. Our first play from our own 20 was a run up the middle by DeMarco Murray. He was stoned for a 1-yard loss. On second and 11, Tony Romo hit Dez Bryant for 10 yards. Third and one. This is where the Dallas Cowboys would falter, crash and burn, spontaneously implode. Instead of coming up with some gadget or trick play, they handed the ball to DeMarco Murray who went off the right tackle for 8 yards and a first down. The next play, we handed the ball to DeMarco Murray for 17 yards. The Cowboys ran the clock and ran DeMarco Murray. There was one more pass to Dez Bryant for 13 yards. The Cowboys moved the ball into field-goal range. Dan Bailey, formally our most viable player, kicked a 49-yard field goal with a little over one minute left in the game to make it a 2-score game. The game is over.

This is what I find most impressive. The Dallas Cowboys are actually forcing their will on opposing defenses. It is wonderful to see. I would encourage Dallas Cowboys fans to have reserved optimism. The Cowboys still have a lot of problems. Too many penalties. No pass rush. Inability to cover receivers. I will start getting excited when the Dallas Cowboys start winning in December. 🙂 For now, it’s just good to have the Dallas Cowboys winning.