Clueless at the Fed

Transcripts from the Fed meetings in 2006 have been released. Wow. These guys were completely clueless. One would have figured that the folks at the Fed would have been worried about our economy in 2006. This was just before the bottom fell out of the housing market. There was no talk about the housing market possibly pulling our whole economy into the toilet. There was talk about inflation being a problem. There was way too much talk about the greatness of Alan Greenspan who had announced that he was stepping down. I find all of this very illuminating. We tend to think of economists as having some insight into the mysteries of our economy and the market. I thought that with just a few months before the largest collapse of our economy since the Great Depression that someone in the room at one of these meetings would have been sounding the alarm. Nope.

Transcripts can be found here.

Some officials, including Susan Bies, a Fed governor, suggested that a housing downturn actually could bolster the economy by redirecting money to other kinds of investments.

And there was general acclaim for Alan Greenspan, who stepped down as chairman at the beginning of the year, for presiding over one of the longest economic expansions in the nation’s history. Mr. Geithner suggested that Mr. Greenspan’s greatness still was not fully appreciated, an opinion now held by a much smaller number of people.

Meanwhile, by the end of 2006, the economy already was shrinking by at least one important measure, total income. And by the end of the next year, the Fed had started its desperate struggle to prevent the collapse of the financial system and to avert the onset of what could have been the nation’s first full-fledged depression in about 70 years.

Economy continues to head toward the toilet

Although neocons will try to tell us that the fundamentals are solid. NOT! Anytime we have huge banks investing in hundreds of thousands of questionable loans, how is that sound? Then instead of looking into the investment, other investment groups that are either too lazy or too greedy to actually study what they are getting, will buy chunks of these sub-prime mortgages. So, Merrill Lynch, Countrywide and Citigroup are just a couple of well known institutions which are now taking a bath.

Let’s look at other data. Americans aren’t saving. How can they? Nothing is built to last except Craftsmen tools. Not cars and certainly not cellphones. Median income has been stagnant under Bush therefore it is no surprise that no one has any money to save.

Fed Chairman Alan Greenspan Ben Bernanke testified on capital hill today that a stimulus package needs to be put in place pretty quickly. Wasn’t this the guy who was telling us just a couple of months ago that everything was hunky dory? I’m just askin’??

Update: I forgot to mention that the stock market tanked today.

United for urgent action, the White House and Congress raced toward emergency steps Thursday to rescue the national economy from a possible recession, including tax rebates of $300 or more for many Americans.

Federal Reserve Chairman Ben Bernanke endorsed the idea of putting money into the hands of those who would spend it quickly and boost the flagging economy. (more…) 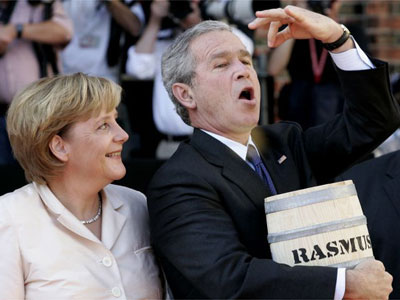 President Bush’s rating continue to solidify in the toilet.  (I’m sure that there are several references that I should make but I’ll keep those to myself.)

Are you satisfied or dissatisfied with the way things are going in the United States at this time? 25% Satisfied, 71% Dissatisfied, 4% Don’t Know

Do you approve or disapprove of the way George W. Bush is handling his job as president? 28% Approve, 64% Disapprove, 8% Don’t Know