Gov Scott Walker a danger to the environment, also (Update) 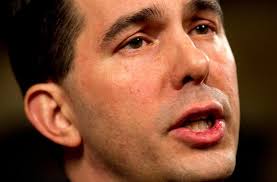 The Governor of Wisconsin Scott Walker has made a name for himself. He was unknown three weeks ago. Now he is the face of the GOP agenda.

For an excellent update from C&L on the Wisconsin protests – here and here.

On Friday, Think Progress posted “REPORT: Top 10 Disastrous Policies From The Wisconsin GOP You Haven’t Heard About.”  I’m reposting the whole piece below since four of those disastrous policies would subject Wisconsin families to dirtier air and dirtier water.

As the standoff between the Main Street Movement and Gov. Scott Walker (R-WI) continues for the twelfth day, much of the media coverage — and anger — from both sides has focused on Walker’s efforts to strip Wisconsin public workers of their right to collective bargaining. But Walker’s assault on public employees is only one part of a larger political program that aims to give corporations free reign in the state while dismantling the healthcare programs, environmental regulations and good government laws that protect Wisconsin’s middle and working class.

Below, ThinkProgress examines ten of the most disastrous policies the Wisconsin GOP is pursuing:

1. ELIMINATING MEDICAID: The Budget Repair Bill includes a little-known provision that would put complete control of the state’s Medicaid program, known as BadgerCare, in the hands of the state’s ultra-conservative Health and Human Services Secretary Dennis Smith. Smith would have the authority to “to overridestate Medicaid laws as [he] sees fit and institute sweeping changes” includingreducing benefits and limiting eligibility. Ironically, during the 1990s it wasRepublicans, especially former Gov. and Bush HHS Secretary Tommy Thompson, who helped develop BadgerCare into one of the country’s most innovative and generous Medicaid programs. A decade later, a new generation of radical Republicans is hoping to destroy one of Wisconsin’s “success stories.”

2. POWER PLANT PRIVATIZATION AND ENVIRONMENTAL NEGLECT: The same budget bill calls for a rapid no-bid “firesale” of all state-owned power plants. One progressive blogger called the proposal “a highlight reel of all of the tomahawk dunks of neo-Gilded Age corporatism: privatization, no-bid contracts, deregulation, and naked cronyism” and suggested that the provision will open the way for large, politically connected corporations, like Koch Industries, to buy up the state’s power plants on the cheap. While it’s unclear whether corporations would be interested in buying the plants, a similar proposal was vetoed six years a go by Gov. Jim Doyle (D), who called the plan fiscally and environmentally irresponsible. Many of Wisconsin’s power plants are in violation of federal clean air regulations and desperately need to be upgraded and cleaned up — not dumped into the private sector.

3. DANGEROUS DRINKING WATER: Republican lawmakers have introduced bills in both the Senate and the House which would repeal a rule requiring municipal governments to disinfect their water. Conservatives have said that the clean water rule — which went into effect in December — is simply too expensive. Yet the rule only affects 12 percent of municipalities and the price may be worth it. In 1993, 104 people died and 400,000 fell sick when the Milwaukee water supply became infected. Even two decades later, the Environmental Protection Agency Advisory Board notes that 13 percent of acute gastro-intestinal illnesses in municipalities that don’t disinfect their water supplies are the result of dirty water. Municipalities can keep their water clean for as low as $10,000 per well — but apparently for the Wisconsin GOP that is too high a price to pay to keep citizens safe from deadly microorganisms.

5. FISCAL IRRESPONSIBILITY: Walker signed a bill this week requiring a 2/3 supermajority in the legislature to pass any tax increase. Republican lawmakers are now reportedly considering a constitutional amendment that would make the rule permanent. A similar constitutional amendment in California has been called the “source of misery” of that state’s crippling budget crisis and has forced lawmakersto “gut public education, slash social services and health care programs, close prisons, and lay off record numbers of public employees.” While claiming to “make a commitment to the future instead of [choosing] dire consequences for our children” Walker and GOP lawmakers are instead putting generations of Wisconsinites in a “fiscal strait-jacket.” (more…)

Well, this is becoming a very big deal. Millions of dollars are being spent this election cycle. The question is who is donating the money? It appears that the US (United States) Chamber of Commerce is taking moolah from foreign companies and then spending that money to bash Democratic candidates.

Last week, ThinkProgress published an exclusive story about the U.S. Chamber of Commerce’s foreign fundraising operation. We noted the Chamber raises money from foreign-owned businesses for its 501(c)(6) entity, the same account that finances its unprecedented $75 million dollar partisan attack ad campaign. While the Chamber is notoriously secretive, the thrust of our story involved the disclosure of fundraising documents U.S. Chamber staffers had been distributing to solicit foreign (even state-owned) companies to donate directly to the Chamber’s 501(c)(6).

We documented three different ways the Chamber fundraises from foreign corporations: (1) An internal fundraising program called “Business Councils” used to solicit direct, largely foreign contributions to the Chamber, (2) Direct contributions from foreign multinationals like BP, Siemens, and Shell Oil, and (3) From the Chamber’s network of AmCham affiliates, which are foreign chambers of the Chamber composed of American and foreign companies. The Chamber quickly acknowledged that it receives direct, foreign money, but simply replied, “We are not obligated to discuss our internal procedures.” Instead of providing any documentation or proof to demonstrate foreign money is not being used for electioneering purposes, the Chamber launched an aggressive media strategy to first, attack ThinkProgress with petty name-calling and second, to confuse the media by highlighting the Chamber’s relatively minor AmCham fundraising, which the Chamber says (also without documentation) totals “approximately $100,000” from all 115 international AmCham chapters. The Chamber and the media largely ignored ThinkProgress’ revelation about the Chamber’s direct foreign fundraising to its 501(c)(6) used for attack ads.

Yesterday, the Chamber’s chief lobbyist Bruce Josten, who has been spoon-feeding much of the media distortions about our report, went on Fox News (whose parent company donated $1 million to the Chamber recently for its ad campaign) to again try to dilute the issue by dissembling about the Chamber’s fundraising and membership. “We have probably 60 or so foreign multi-national companies in our membership that we have had for decades, many of which have been in the United States for half a century or a century,” said Josten.

The Chamber is being deceptive. In addition to multinational members of the Chamber headquartered abroad (like BP, Shell Oil, and Siemens), a new ThinkProgress investigation has identified at least 84 other foreign companies that actively donate to the Chamber’s 501(c)(6). Below is a chart detailing the annual dues foreign corporations have indicated that they give directly to the Chamber (using information that is publicly available from the Business Council applications and the Chamber’s own websites): 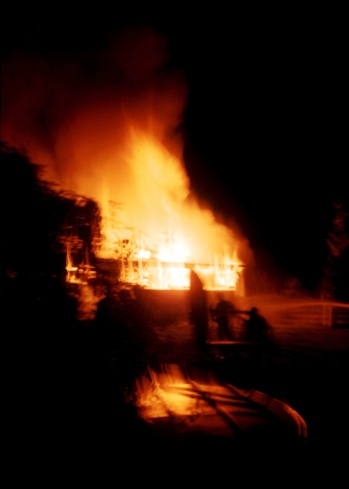 It is funny how we re-argue settled policy in this country. We talked about what should be public and what should be private over 50 years ago. Does being poor mean that you can’t get fire protection? If you listen to conservatives, the answer is you get what you pay for. (Translation – Screw the poor.)

As ThinkProgress reported earlier this morning, South Fulton firefighters from Obion, Tennessee, last week stood by and watched as a family’s home burned down because their services were available by subscription only, and the family had not paid the $75 fee. As ThinkProgress noted, the case perfectly demonstrated conservative ideology, which is based around the idea of the on-your-own society and informs a policy agenda that primarily serves the well-off and privileged.

Now, leading conservative authors from modern conservatism’s bulkhead magazine, The National Review, have come out in defense of Obion County firefighters’ policy of servicing rural citizens by paid subscription only. The magazine’s commentary on the issue started with a blog post by Daniel Forster, one of the magazine’s staff writers. Writing on the National Review blog The Corner, Forster condemned the behavior of the county, saying that while he has “no problem with this kind of opt-in government in principle,” he sees no “moral theory” under which the firefighters would be justified in watching the house burn down:

I have no problem with this kind of opt-in government in principle — especially in rural areas where individual need for government services and available infrastructure vary so widely. But forget the politics: what moral theory allows these firefighters (admittedly acting under orders) to watch this house burn to the ground when 1) they have already responded to the scene; 2) they have the means to stop it ready at hand; 3) they have a reasonable expectation to be compensated for their trouble?

Yet, Forster’s fellow conservative writers found it hard to tolerate his view that families shouldn’t have to watch their homes burn down as firefighters stand there with their hoses. First, Kevin Williamson responded, comparing the family whose home was destroyed to “jerks, freeloaders, and ingrates”:

Dan, you are 100 percent wrong. […] And, for their trouble, the South Fulton fire department is being treated as though it has done something wrong, rather than having gone out of its way to make services available to people who did not have them before. The world is full of jerks, freeloaders, and ingrates — and the problems they create for themselves are their own. These free-riders have no more right to South Fulton’s firefighting services than people in Muleshoe, Texas, have to those of NYPD detectives. (more…)