Senator Wendy Davis. Wow, a Progressive in Texas. Yes, I know that that there are Progressives in Texas but for the most part they are marginalized.

It will likely be a long day for Texas lawmakers at the State Capitol. The special session of the Legislature ends Tuesday night, and several issues are still on the table.

Perhaps the most controversial topic is a bill that includes some of the toughest abortion regulations in the country. Senate Democrats have said they are prepared to do whatever they can to prevent a vote on it.

Wearing a pair of comfortable pink tennis shoes Senator Wendy Davis of Fort Worth began her filibuster, or long speech, at 11:18 a.m. Tuesday. She could talk until the session ends Tuesday at midnight.

This Is How State-Mandated Rape Is Defended In Texas (Updated) 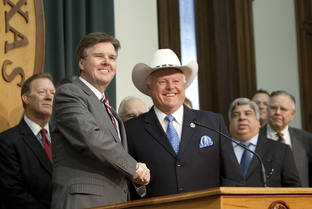 Sen. Dan Patrick, R-Houston with Rep. Sid Miller R-Stephenville speak together if favor of HB 15, the abortion sonogram bill on May 4th, 2011

Above you see a picture from the past May of the 15 men and 2 women who worked out final language of the sonogram bill in the Texas Legislature.

Senator Patrick is in the middle of that picture shaking hands with Texas State Rep. Sid Miller  in the white hat.

“Here’s what a woman in Texas now faces if she seeks an abortion.  Under a new law that took effect three weeks ago with the strong backing of Gov. Rick Perry, she first must typically endure an ultrasound probe inserted into her vagina. Then she listens to the audio thumping of the fetal heartbeat and watches the fetus on an ultrasound screen. She must listen to a doctor explain the body parts and internal organs of the fetus as they’re shown on the monitor. She signs a document saying that she understands all this, and it is placed in her medical files. Finally, she goes home and must wait 24 hours before returning to get the abortion. “It’s state-sanctioned abuse,” said Dr. Curtis Boyd, a Texas physician who provides abortions. “It borders on a definition of rape. Many states describe rape as putting any object into an orifice against a person’s will. Well, that’s what this is. A woman is coerced to do this, just as I’m coerced.”

Here is the full series of Doonesbury comic strips that are currently being run on this issue.

Senator Patrick is aware of the opposition this has generated. Below you will see one of the three notes that Senator Patrick has written in recent days on his Facebook page about the forced sonogram law.

I don’t need to offer much rebuttal to what Senator Patrick has said. The facts are going to speak for themselves. Just read what he says. Just listen to the tone.

And then, knowing the elected officials behind the law, think about what is taking place.

Senator Patrick writes of “the left, the pro abortion crowd, and the media elite.” The Senator says— “I have been screamed at by total strangers in the street who recognize me.”

Senator Patrick sees himself as the victim. END_OF_DOCUMENT_TOKEN_TO_BE_REPLACED