US patent office is in bad need of reform.

Bachmann may be down but unfortunately, I don’t think that she should throw in the towel yet.

I think that President Obama needs to think big. He needs to go big. I would push him to go for a $1.5 trillion jobs package. Let the Republicans’ heads explode, to quote Cheney. He should take the package to the American people. He should say that an unemployment rate of 9.1% is criminal. We have to do better. We have to bring unemployment under 5% as quickly as possible. Rick Newman has a more middle of the road suggestion for the president.

I still think that Romney’s job proposal is laughable. There is nothing new. It is a continuation of what Bush started and that didn’t end so well for us. Well, before I completely trash it I should wait for some economists to come out with their thoughts.

We need to prepare for more costly disasters, not less. Eric Cantor, are you listening?

A significant number of aircraft have been mobilized to assist with the heavy fire activity. Six heavy airtankers, three 1,500-gallon scoopers, 15 single-engine airtankers, 12 helicopters, and 12 aerial supervision aircraft are in place. Eight National Guard Blackhawk and three Chinook helicopters have been providing critical aerial support. In addition, a 12,000-gallon DC-10 airtanker will be activated Friday morning at the Austin-Bergstrom Airport. This aircraft was instrumental in helping to contain Wildcat Fire in Coke County last April.

A Type I Incident Management Team is in place in Bastrop this morning and is assisting Texas Forest Service in managing the Bastrop County Complex. Additional Type 1 teams have been requested to assist with the large fires in Northeast and Southeast Texas.

If you are going to invest in government bonds, whose are the safest? 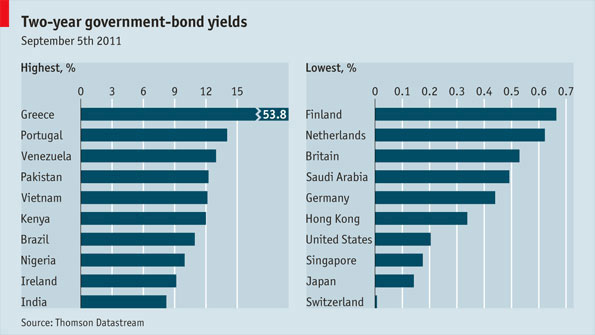 45-year-olds need to plan on retiring at age 70 – Rick Perry. What? Why retire then? Who will have the money? Let’s just retire when we are dead. Is that okay with you, Rick?

Did you catch the London speech of Chicago Fed Chair Charles Evans? Here’s a piece:

Suppose we faced a very different economic environment: Imagine that inflation was running at 5% against our inflation objective of 2%. Is there a doubt that any central banker worth their salt would be reacting strongly to fight this high inflation rate? No, there isn’t any doubt. They would be acting as if their hair was on fire. We should be similarly energized about improving conditions in the labor market.

This has been my point for over 12 months. There are too many Americans out of work. Both parties are acting as if there is something that they need to put up at the Dry Cleaners. It is important but …. Damn it. Millions of Americans are out of work. Let’s get to it. Let’s put Americans back to work. NOW!

Finally, just to prove that we aren’t the only nation that has really crazy people – we have been voted the “coolest nation.” Really? Who votes in that poll? When you look at Michele Bachmann, Ron Paul and Mitt Romney, do you think cool? Will Smith – cool. Lady Gaga – cool or odd? 🙂

Several decades ago, conservatives got together and figured that their message was not resonating with Americans. For almost a decade they work hard at honing their message. They decided not to get bogged down in complicated explanations and really streamline their message to only a few pithy statements. The government is too big. Taxes are too high. Military spending is always okay. In a nutshell that has been their mantra. The true genius of the conservative agenda has been the bait and switch. Rick Perry is a master at this. Several years ago he convinced Texans that businesses need to pay more. They need to carry their fair share. We all know that Republicans hate taxes. We all know that Republicans love big business. Therefore, this did not make sense. The devil is in the details.

In Texas there’s no income tax. So, Texans pay extremely high property taxes in order to make up for this deficit. Property owners were screaming for some relief. Rick Perry saw an opportunity. He told property owners that he’s going to give them some relief by enacting a marginal tax on businesses. As it turned out, this tax would not even come close to closing the gap from the reduction in taxes on property. Therefore, a budget crisis is created. Republicans look at budget crises as opportunities to cut government services. This is exactly what Rick Perry did. You can read more about Rick Perry’s despicable bait and switch here.

What stories are you following? Any thoughts?