ObamaCare (Affordable Care Act) has been upheld by the Supreme Court. I’m a little surprised.  The following is from ScotusBlog:

That, the Court concluded by a six-to-three vote, was what Congress intended when it passed the sweeping overhaul of the health insurance market five years ago.   If the subsidies are not available across the nation, Chief Justice John G. Roberts, Jr., wrote for the majority, that would bring about “the type of calamitous result that Congress plainly meant to avoid.”

Had the ruling in King v. Burwell gone the other way, to eliminate subsidies in thirty-four states, at least 6.4 million Americans likely would have almost immediately lost the insurance coverage that many of them have for the first time.  And, given the way Congress wrote an interlocking law, the cascading effect of the loss of subsidies for so many probably would have collapsed the whole arrangement — a point that Roberts embraced in foreseeing the potential for a “death spiral” for the ACA.

Muslim Violence in the Middle East Results in Tragedy 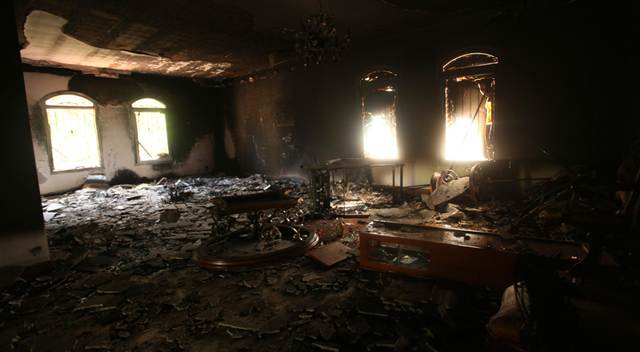 The US ambassador to Libya, J. Christopher Stevens, was killed when the American Embassy was overrun in Benghazi. Several other embassy staffers were killed. Ambassador Stevens is the first US ambassador killed in the line of duty since 1979. There are lots of things in this world that I don’t understand. Senseless violence (or any violence for that matter) in the name of religion is sad, ironic and goes against the Judeo – Christian – Islamic heritage. The God that I worship, as a Christian, is about love, kindness and understanding. The God that I worship is supposed to be the exact same God of Islam. Then again, when you look back in history, senseless violence has followed religion everywhere. We had the Crusades. We had prolonged and extended violence in Northern Ireland as Protestants fought Catholics. In this country, the United States, we had an Al Qaeda-like terrorist organization, the Ku Klux Klan, who wrap themselves in biblical scripture to justify their acts of barbarism. We’ve also seen the rise of various extremist groups over the last decade or so and many of these groups try to use biblical scripture to justify their unjustifiable acts. (I do not want to forget to mention that other embassies were attacked in the Muslim world, including our embassy in Egypt.)

Tomorrow, or maybe later on tonight, I will talk about Mitt Romney’s senseless attack on President Obama. At some later time we will need to discuss the vulnerability of our ambassadors worldwide.

In a statement confirming the four fatalities, President Obama said he strongly condemned the killings and had ordered increased security at American diplomatic posts around the world. It was the first death of an American envoy abroad in more than two decades.
END_OF_DOCUMENT_TOKEN_TO_BE_REPLACED

In high school, you knew that there were some teachers who were going to call on almost every student in the room and therefore you had to be ready. These debates are exactly the same thing. You have to be ready. Rick Perry simply is not ready. I don’t know if he can remember what he’s been told. It is mind boggling how awful he has been in these debates.

So, you’re on Fox news and you getting softball questions about foreign policy. These are questions that you have been thinking about for the last six months. If you haven’t thought about these questions, why are you running for president? Rick Perry gets a softball question about what to do if a terrorist organization gets a hold of Pakistan’s nuclear weapons. This is a nightmare scenario that the intelligence community has been talking about for over a decade. This is easy.

First, the right answer – If a terrorist organization gets a hold of a nuclear weapon, we have to approach the problem from multiple different areas. First of all, I’m on the phone with the director of the CIA and the director of National Intelligence. What do they know and what are our options? Secondly, I’m on the phone with the current president of Pakistan, Asif Ali Zardari. What does he know? While I’m on the phone with him, we are coordinating a conference call with the presidents/Prime Ministers of Britain, France, Germany, India and we’re patching in the NATO commander. There will be several more calls over the next several hours. We need to have a strong, muscular coordinated response that secures the nuclear weapon or destroys it. It is clear that there are some factions within the Pakistani army and the Pakistani special intelligence forces that sympathize with the Taliban/Al Qaeda. We want Pakistan to know that they’re a sovereign country, but we also want them to know that we are going to take a strong and aggressive approach to this problem. There’ll be no negotiating with terrorists. The terrorists who have taken this nuclear weapon will be hunted down and captured or killed. We’ve proven that we have the capability and capacity to do this in Yemen (Anwar al-Awlaki) and with Osama bin Laden.

This is the right answer. This is the answer that plays well both with the Republican and Democratic audience.

What Rick Perry said was the wrong answer. What is he talking about regarding F-16 sales to India? I find it interesting that he mentions that the Obama administration did not sell F-16s to India but somehow he forgets to mention that the Obama administration has negotiated the sale of F-35s, one of our most sophisticated jets. How is the selling F-16 fighters to India going to do anything to secure a loose nuclear weapon in Pakistan? What you saw was Rick Perry in panic mode. Basically, his mind pulled up what ever he could remember about Pakistan. Admiral Mullen said something about a terrorist group. He remembered this and spewed it on stage. He remembered something about fighter jet sales to India. He said whatever came to his mind (unfortunately, nothing that came to his mind) and answered the question anyway. Fail!