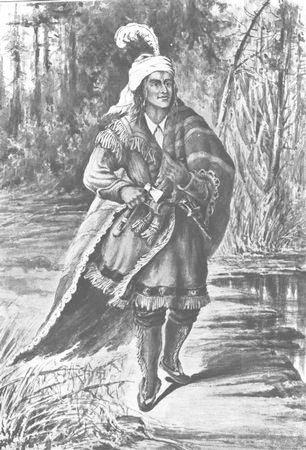 Few better dramatize the concept of resistance than the great Chief Tecumseh. (1768-1812) Tecumseh refused accommodation or assimilation with encroaching whites. He thought he would be better off dead than accepting these things. In this he spoke for himself, for his Shawnee tribe and for other unified Native American tribes he led into battle against Americans before his death in the War of 1812.

Tecumseh is distinct from the first three figures in this series which has run on Where’s the Outrage? this week. Frances Perkins and Barry Goldwater saw politics as the path to change. They were looking for the reigning society to accept new ideas. Thomas Paine, though willing to fight, imagined a better future and was not inherently looking for war.

Tecumseh reached the point of wanting war. He wasn’t really looking for a better future. Tecumseh wanted war knowing he might lose. He understood that settlers would be hard to displace. He wasn’t looking for revolution. He was looking for a worthwhile way to die. He was seeking a way to lose that gave value to his life and to the life of his people.

What does the principled individual do in a valueless society? What does the reformer do who sees that her cause won’t be won in her lifetime? What did an American slave do who saw he was going to live the rest of his life in bondage? What response could be offered by the Native American who saw his people victims of genocide? END_OF_DOCUMENT_TOKEN_TO_BE_REPLACED