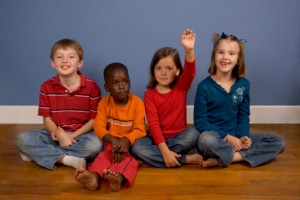 What do you see in this picture? Diversity? Reality?

A friend of mine wrote a lengthy response to this post. I thought I would try to discuss why I think he is so far off base. His words are blockquoted.

The case of Professor Derek (Derrick) Bell, his supporters, and his passionate belief in Critical Race Theory simply proves that racism and prejudice are as alive and well in some black folks as it is in some white folks and some in other races.

It is important for us to acknowledge that both Whites and Blacks have issues with race. We all do. We all have stereotypes and prejudices that we need to fight against in order to attempt to see people as they are and not as we want them to be. Now, Professor Bell’s Critical Race Theory has nothing to do with the fact that racism exists throughout the United States and can be found in Blacks, Whites, Latinos – all races. BTW, have you read his theory? Are you basing your judgment of his theory based on someone else’s biases? Professor Bell grew up in the 1930s and 1940s. I think one could easily argue that America promoted the White culture and suppressed all minorities during this time frame. One could also argue that after the 1960s several laws were enacted which severely penalized Black behavior. These laws made it much more likely that Blacks would be arrested and jailed for a prolonged period of time for behavior that was similar to, but perhaps not exactly the same as, the behavior of their White counterparts. Specifically, I am talking about how drug laws are enforced in this country. Crack cocaine is more prevalent among Blacks and other minorities. The sentences are much harsher then possessing powder cocaine, which is more popular in the White community.

Now that we have our first Black President can we say things are getting better between the races?

Consider the situation where a black professor was questioned by a white police officer outside of Boston a few years ago. The President referred to this as a “teachable moment.”

Unfortunately, however, he elevated the poison of prejudice and racial division by immediately labeling the White cop as acting “stupid.” This led many to conclude that the President was too quick to side with his own race rather than take a higher moral stand and show a more reasoned and deliberative response expected from a leader.

Wait a minute. Let’s go over the facts. This wasn’t simply any Black professor. This was a Black professor at Harvard who is a leading historian. Henry Louis Gates. This guy is world-famous. Now, let’s look at the facts, which you seem to have glossed over. Professor Gates got arrested for breaking into his own house. Now, let’s think about this just for a second. How many well-known and world-renowned professors get arrested for breaking into their own house? He got arrested after he showed not only his driver’s license but also his Harvard faculty ID. Both had his name and picture on them. One revealed his address – the house that he was standing in. So, it’d already been clearly established that that was his house. Yet, he got arrested anyway.

Now, let’s examine what President Obama said. “… I think it’s fair to say, No. 1, any of us would be pretty angry; No. 2, that the Cambridge police acted stupidly in arresting somebody when there was already proof that they were in their own home; and, No. 3 … that there’s a long history in this country of African-Americans and Latinos being stopped by law enforcement disproportionately.” He went on to say that this shows “how race remains a factor in this society.” He is exactly right.

I’m sorry if you did not like the language that President Obama used, but he was exactly right. There was no reason to arrest this man. None. Should’ve Professor Gates acted better? Sure. But he was in his own house. You can act as you want in your own house and not get arrested. Should he have berated the officer by continually asking for his name and badge number? No. But again, you shouldn’t get arrested for asking a police officer for their name and badge number. You don’t have to be polite. If you break the law, which the professor hadn’t, you should get arrested. I think that Colin Powell summed this up relatively well when he said, “You don’t argue with a police officer. In fact, in our schools today, in order to make sure that we don’t have things escalate out of control and lead to very unfortunate situations, we tell our kids, when you’re being asked something by a police officer, being detained by a police officer, cooperate.” With regard to Sgt. Crowley, Powell stated that: “Once they felt they had to bring Dr. Gates out of the house and to handcuff him, I would’ve thought at that point, some adult supervision would have stepped in and said ‘OK look, it is his house. Let’s not take this any further, take the handcuffs off, good night Dr. Gates.”

Jon Shane, a police officer for 17 years as well as a professor of criminal justice, told Time Magazine that the responding officer should not have arrested Professor Gates. The arresting officer should have treated Gates’s behavior as a First Amendment right under the Constitution.

I’m going to stop right here because I think we’ve already seen racial bias in this discussion. An innocent man gets arrested and my friend blames President Obama for saying the arrest was stupid. (The case was dropped because there was no legal base to go forward. I would say a smart arrest is one that leads to a conviction in court. A stupid arrest is one that gets the case thrown out of court.) He didn’t take any time to praise President Obama for saying that this was a teaching moment. He didn’t take any time to praise the President for bringing the two men together at the White House to sit down and have their “beer summit.” Now, it should be understood that I’m not saying that Officer Crowley was a bad man. What I am saying is that the whole situation would’ve been different if Professor Gates were White and not Black. If he were White, I think the chance of his being arrested, with the exact same scenario and the exact same behavior, is infinitesimally small, like …zero.

What are your thoughts? How do we fix this tremendous problem we have in our country?

I think that President Obama did an excellent job in acknowledging that both parties could have handled this better (Professor Gates and the Cambridge police). Of course, he could have “calibrated those words differently.”

President Obama just made a surprise appearance at the daily White House press briefing, taking over the podium from Press Secretary Robert Gibbs to make a few comments about the hullabaloo over the arrest of Harvard professor Henry Louis Gates Jr.

“These are two decent people,” Obama said. He said he spoke by phone with Sgt. James Crowley, the arresting officer, which he said confirmed his idea of Crowley as a good, decent police officer.

But, he said, African-Americans are sensitive to racial issues. “Even when you have a police officer that has a fine track record on racial sensitivity,” he said, the interaction was “fraught with misunderstanding.”

“My hope is this ends up being a teachable moment,” Obama said.

As for those who criticized the president for getting involved:

There are some who say as president I shouldn’t have stepped into this at all, (which) I disagree with. The fact that this has become such big issue is indicative of fact that race is still a troubling aspect of our society.

“Whether I were black or white, I think me commenting on this and hopefully contributing to constructive, not negative, (discussion) … is part of my portfolio,” Obama said.

As for the teachable moment, he said we need to spend “a little more time listening to each other, and focus on how we can generally improve relationships between police officers and minority communities.”

He also said Crowley suggested that he, the president and Gates meet over a beer in the White House. Obama said it hasn’t been scheduled, but seemed open to the idea.

Crowley apparently asked Obama how to get reporters off his lawn.

“I informed him I can’t get the press off my lawn. He pointed out my lawn is bigger than his lawn,” he said, to laughter from the press corps. “Sgt. Crowley would be happy for you to stop trampling his grass.”

Obama also joked that no one’s been paying much attention to health care because of this story.

Rachel Maddow talks with Professor Melissa Harris Lacewell about this ordeal. What does this say about the President and what does it say about us as a country.