I took some time and went through the census data. I wanted to investigate the percentage of Whites, Blacks and Hispanics and their educational status. As we know, educational status correlates to socioeconomic status. The better educated you are, the more opportunities are open for you. Nowhere in our society should we see more equality then in the classroom. For the most part, public schools do not offer individual education. This is education for the masses. Therefore, if Johnny, David, Betty and Susan are all in the same classroom, in theory, they should all be exposed to the same material. They should all have the same opportunity to excel or to fail.

When we look at the data of those who graduated high school since 1940, there’s a clear persistence of Whites graduating at higher rates than Blacks or Hispanics. 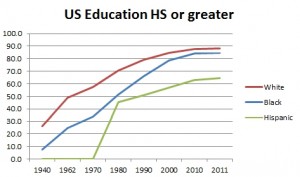 The education disparity increases dramatically when we look at the percentage of Americans who graduated college, by race. 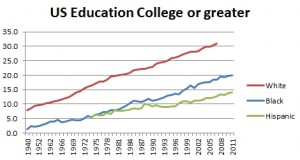 Although I did not graph it here, this disparity increases when you look at the percentage of Americans who have obtained a professional degree, by race.

Seven. Trials are rare. Only 3 to 5 percent of criminal cases go to trial – the rest are plea bargained. Most African Americans defendants never get a trial. Most plea bargains consist of promise of a longer sentence if a person exercises their constitutional right to trial. As a result, people caught up in the system, as the American Bar Association points out, plead guilty even when innocent. Why? As one young man told me recently, “Who wouldn’t rather do three years for a crime they didn’t commit than risk twenty-five years for a crime they didn’t do?”

Nine. The longer the sentence, the more likely it is that non-white people will be the ones getting it. A July 2009 report by the Sentencing Project found that two-thirds of the people in the US with life sentences are non-white. In New York, it is 83%.

Ten. As a result, African Americans, who are 13% of the population and 14% of drug users, are not only 37% of the people arrested for drugs but 56% of the people in state prisons for drug offenses. Marc Mauer May 2009 Congressional Testimony for The Sentencing Project.

Eleven. The US Bureau of Justice Statistics concludes that the chance of a black male born in 2001 of going to jail is 32% or 1 in three. Latino males have a 17% chance and white males have a 6% chance. Thus black boys are five times and Latino boys nearly three times as likely as white boys to go to jail.

Twelve. So, while African American juvenile youth is but 16% of the population, they are 28% of juvenile arrests, 37% of the youth in juvenile jails and 58% of the youth sent to adult prisons. 2009 Criminal Justice Primer, The Sentencing Project.

Thirteen. Remember that the US leads the world in putting our own people into jail and prison. The New York Times reported in 2008 that the US has five percent of the world’s population but a quarter of the world’s prisoners, over 2.3 million people behind bars, dwarfing other nations. The US rate of incarceration is five to eight times higher than other highly developed countries and black males are the largest percentage of inmates according to ABC News.

For those who want more detail, for those who believe the bullet points are somewhat superficial and for anyone who would like more background, here’s a very nice paper on racial disparities in the criminal justice system produced by the Sentencing Project.

So, what can we conclude? Race identification and race bias are a part of our history. It has really shaped America over the last 250 years. The fact that we passed several pieces of legislation in the mid-’60s in order to try to reverse this trend doesn’t act like a magic wand and make all the problems surrounding race go away. Instead, many problems persist. When you look at the inequality in education, our justice system and multiple other aspects of life, you must conclude that race plays a significant role in the ongoing social economic status of Blacks and Hispanics. Now, after a week of discussion and set up, I’m ready to discuss Harvard Professor Derrick Bell and his critical race theory. Are you ready?