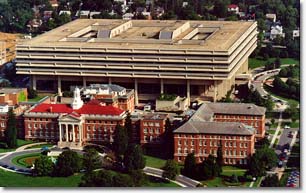 Rats? Mice? Roaches?  What the Hell?  Walter Reed Hospital is supposed to be our flag ship military hospital.

Of course, Keith Olbermann is on top of this story.  The story was broken in the Washington Post.  Dana Priest, one of the authors of the article, is a fabulous reporter.  For all of the media bashing that is going on, no one should bash her work.

The White House and congressional leaders called yesterday for swift investigation and repair of the problems plaguing outpatient care at Walter Reed Army Medical Center, as veterans groups and members of Congress in both parties expressed outrage over substandard housing and the slow, dysfunctional bureaucracy there.

Top Army officials yesterday visited Building 18, the decrepit former hotel housing more than 80 recovering soldiers, outside the gates of the medical center. Army Secretary Francis Harvey and Vice Chief of Staff Richard Cody toured the building and spoke to soldiers as workers in protective masks stripped mold from the walls and tore up soiled carpets.

At the White House, press secretary Tony Snow said that he spoke with President Bush yesterday about Walter Reed and that the president told him: “Find out what the problem is and fix it.” END_OF_DOCUMENT_TOKEN_TO_BE_REPLACED