The Greatness of Basketball (Update) 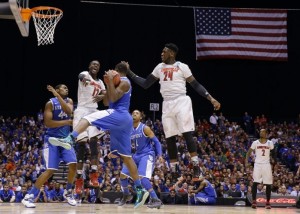 I don’t watch as much basketball as I used to in college. In college, if basketball was on TV I was watching. Well, things have changed. I’m older. I no longer have the delusion that I could really play with many of the great college and professional basketball players.

The greatness of basketball is that it is really all about managing chaos. Five-on-five is chaos and confusion. I don’t care how great the play that is drawn up on the sideline – most of these plays will break down. Then what? Basketball is about limiting turnovers. This means that you and four teammates need to be on the same page.

Basketball is about crisp outlet passes. It is about speedy athletes fulling the lanes with the hope that an easy bucket is coming their way. It is equally about the defense hustling back to stop the ball and prevent those guys from fulling those lanes.

If you are a basketball fan this is the best time of year. The NBA is finally playing meaningful games. The NCAA’s March Madness is now in full swing. Louisville verses Kentucky. It doesn’t get any better than that!!!

Update: Most of the time when you have a game like Kentucky and Louisville, it never lives up to the hype. Ladies and gentlemen, this was basketball at its best. Both teams played very, very well. It was one of the most enjoyable games that I have seen in a long, long time. Oh, BTW, there were several other really great games on the same night. The UConn – Iowa State game was fantastic also. GREAT basketball.

Update II: Let’s remember that March Madness is also all about money. I’m not talking about a little bit money, a  million dollars or so. I’m talking about BIG money. Billions of dollars. The one thing that I find very depressing is that everyone is making money except the players. The NCAA is making money. The networks are making money. The coaches are making money. The players ain’t. The vast majority of the players who are entertaining you and me aren’t going to be moving on to the NBA. For the most part, this is it. They move on and become average Americans. (And don’t get me started on the video games in which the NCAA have won the right to use the likenesses of the players without any compensation. That’s just crazy.)

Penn State Nittany Lions were hit with a $60 million fine as well as a ban from postseason play for four years. I was gleaning information from a friend of mine because I hadn’t paid much attention to the NCAA sanctions. My friend didn’t think that the NCAA went far enough. I guess the question is when will a football program/University learn that people are more important than a football program? Will $60 million teach them a lesson? I don’t know the answer to that question. I do know that Penn State should voluntarily close down the program for five years to prove that they are serious. They should find other programs for all their student football athletes. Penn State should pay the cost of moving those students to other universities.