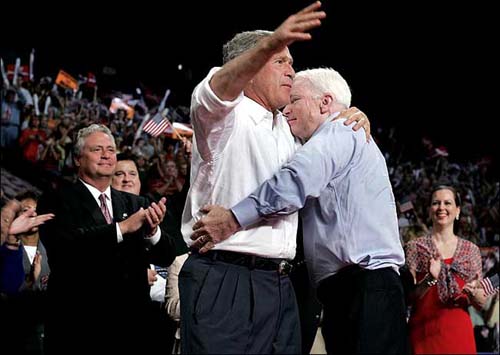 The Cartpetbagger Report has compiled an impressive list of position reversals for John McCain: Sixty-one flip-flops and still counting!

1. McCain thought Bush’s warrantless-wiretap program circumvented the law; now he believes the opposite.

2. McCain insisted that everyone, even “terrible killers,” “the worst kind of scum of humanity,” and detainees at Guantanamo Bay, “deserve to have some adjudication of their cases,” even if that means “releasing some of them.” McCain now believes the opposite.

3. He opposed indefinite detention of terrorist suspects. When the Supreme Court reached the same conclusion, he called it “one of the worst decisions in the history of this country.”

5. McCain was for closing the detention facility at Guantanamo Bay before he was against it.

6. When Barack Obama talked about going after terrorists in Pakistani mountains with predators, McCain criticized him for it. He’s since come to the opposite conclusion.

7. McCain was for kicking Russia out of the G8 before he was against it.

8. McCain supported moving “towards normalization of relations” with Cuba. Now he believes the opposite.

9. McCain believed the U.S. should engage in diplomacy with Hamas. Now he believes the opposite.

10. McCain believed the U.S. should engage in diplomacy with Syria. Now he believes the opposite.

11. McCain is both for and against a “rogue state rollback” as a focus of his foreign policy vision.

12. McCain used to champion the Law of the Sea convention, even volunteering to testify on the treaty’s behalf before a Senate committee. Now he opposes it.

13. McCain was against divestment from South Africa before he was for it. END_OF_DOCUMENT_TOKEN_TO_BE_REPLACED