This week I’m going to have a series of posts on Healthcare and Healthcare Reform. Tell your friends to join the conversion. I should have my first post in this series up early this evening.

Now, START needs Congress to act but the Senate has been stuck.

Sen. Richard Lugar (R-IN) has been the leading Senate Republican urging the upper chamber of Congress to ratify the New START arms control treaty with Russia. However, the Republican obstructionism that has become so routine throughout the past two years of President Obama’s tenure is standing in the way. Sen. Jon Kyl (R-AZ) has been the face of the GOP hamstringing and despite the fact that this non-controversial treaty — one that closely mirrors the one President Reagan signed with the Soviet Union — has been thoroughly debated in the Senate for nearly a year, Kyl told the New York Times, “If they try to jam us [in the lame-duck session], if they try to bring this up the week before Christmas, it’ll be defeated.”

Lugar has been reluctant to criticize his colleagues’ obstruction. When asked last week if they were just playing politics, Lugar said, “I am not ascribing motivations to anybody.” But other Republicans don’t seem to be holding back. Brent Scowcroft served as national security adviser to two Republican presidents and has been pleading with Congress to ratify New START. Profiling Lugar’s awkward position vis-a-vis other Senate Republicans on this issue, Politico reports today that Scrowcroft isn’t being as diplomatic as Lugar on the GOP’s incentive for holding up START:

In an attempt to rally bipartisan support for the treaty, the White House has enlisted the kind of GOP foreign policy wise men that Lugar exemplifies – among them former secretaries of state Henry Kissinger and James A. Baker. But they have had no success with members of their own party, and it has left them scratching their heads over the source of the GOP opposition.

“It’s not clear to me what it is,” said Brent Scowcroft, a former national security adviser to President George H.W. Bush who noted that this START treaty is not very different from previous ones negotiated and ratified under Republican presidents. “I’ve got to think that it’s the increasingly partisan nature and the desire for the president not to have a foreign policy victory.”

Book Report – The War Within 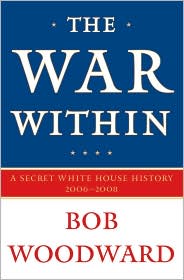 Bob Woodward’s new book The War Within is different than his last three books on the Bush administration. This book was touted as the smoking gun. It was going to explain how we went so wrong in Iraq. At least this was the scuttlebutt. This book does not even attempt to tell us why we got in Iraq nor why we are staying in Iraq. Instead this book explains how we settled on “the Surge.” Just as with every other major decision that the president has had to make over these last seven and a half years, there was never a major meeting in which ideas were batted around. Instead, as President Bush was telling us that we were winning the war in Iraq, privately, he began to come to the conclusion that we needed a change in “strategy.” (The Surge is not really a strategy. Our overall plan had really not changed. The Surge was a tactic.)

It should come as no surprise to anyone who has followed the Bush administration that this policy really wasn’t driven by President Bush. Others enact a policy that they think he wants. In this case, National Security Adviser Steven Hadley was the person that “sensed” that the president wanted a change. He’s the one that called the meetings and steered the meetings in the direction that he wanted them to go. Chuck Robb and Edwin Meese also come out as major players. They were both on the “Iraq study group ” and pushed for language that supported a “temporary increase in troops” to quell the violence. Finally, retired General Jack Keane played a major role not only in getting General David Petraeus chosen to run Iraq but he also is extremely important concerning placing him the head of Central Command. Through back channels it is General Jack Keane who drives the bus. He is one of the few people who can walk into Vice President Dick Cheney’s office and get things done. His influence on the Surge was enormous.

This book does NOT deliver the smoking gun, but does give us another inside look at the Bush White House. It’s not for everybody. For those who believe that George W. Bush is a strong leader, this book ain’t for you.

It appears that the United States warned India back in October that there was going to be an attack on the hotel and business centers in Mumbai.

Contrast the above intelligence “success” to President Bush’s interview with Charlie Gibson last night. Bush admitted that the biggest failure of his presidency was the cataclysmic lack of weapons of mass destruction. Bush had the audacity to place the blame for that travesty at the doorstep of the CIA, when in fact the blame is entirely his. It was his job to look at all the information.  It was his job to weigh the pros and cons. He abdicated that responsibility.

The indictments that a Texas grand jury turned in against Vice President Dick Cheney and former Attorney General Alberto Gonzales have been dismissed. Who’s surprised?

Blogger Glenn Greenwald, who has been on my radio show on a number of occasions, had another great post yesterday. He commented on an issue of the New York Times in which an article brought attention to a number of conflicts of interest regarding General Barry McCaffrey. General McCaffrey is on the payroll of NBC News. Glenn does an excellent job highlighting the hypocrisy of NBC. Generals who show up on the evening news should really be free of conflicts of interest.

The National Bureau Of Economic Research has now officially stated that December 2007 was the start of this recession. So what has the Bush administration been doing for the last year? With the stock market dropping almost 700 points today, I must say I do not believe Bush administration has done enough.

Barack Obama has announced his national security team. Secretary of Defense Robert Gates will continue in his present position. Eric Holder will be the Attorney General. Former General James Jones ( see the Jones commission report) will be his National Security Adviser. Janet Napolitano, governor of Arizona, will become Secretary of Homeland Security. Susan Rice will be nominated for Ambassador to the United Nations. Finally, Senator Hillary Rodham Clinton will serve as Secretary of State. This team is tremendously qualified. As usual, however, I have some questions. Where is General Wesley Clark? I really thought Senator Chuck Hagel would be appointed to Defense. Is there a spot for him in the administration? (By the way, the “fair and balanced” Fox News didn’t even cover the Obama press conference.)

Almost a quarter of United States employees who use the Internet at work spend a little time during the workday looking at on-line pornography. 🙂  Nice. Nothing else need be said.