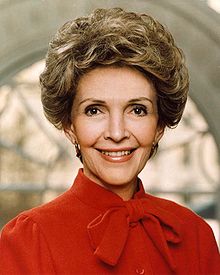 Nancy Reagan has died at the age of 94. Is this the end of an era? I’m not so sure. Nancy and Ronald Reagan were a team. They seemed to play off each other. For years, Ronald Reagan worked on this image and worked on his platform. From the late ’50s Ronald Reagan was always trying to get the right message out there. I think that Nancy was his sounding board. She was the one whom he bounced ideas off of. At least this what I have read. The image of Nancy and Ronald has been so highly polished over the years that it is hard to know what is fact and what is fiction.

I would argue that without Reagan or a Reagan-like figure you couldn’t have a Donald Trump. Ronald would frequently say X, but mean Y. At least his aids would spend a great deal of time explaining what he really meant. It got so bad that America would ignore what Reagan said and go directly to the aides to figure out what new policy was being proposed.

Trump has taken this a step further. He isn’t about policies and white papers. He is about crafting the image of a winner. He is the winner even when he hasn’t won anything. He is crafting the image of the successful businessman in spite of the fact that he has had plenty of failures. Without Nancy and Ronald, there would be no Donald running for president.

Nancy Reagan has died. My heart and prayers go out to her family. May she rest in peace.