The other side of Murtha

I didn’t know anything about Jack Murtha except he is a Hawk that was against the war.  He has been in Congress a long time.  He was a Marine during the Vietnam era.  That’s about it.

So, on the 13th, David Corn published this article to The Nation’s web site which shines a little more light on who Murtha really is (this gives more of a well rounded picture of Murtha more like what O was saying here)-

This morning, I called Melanie Sloan, the executive director of Citizens for Responsibility and Ethics in Washington, a watchdog group, to ask about the potential congressional reforms House Speaker-To-Be Nancy Pelosi is expected to push on Day One. But before we got to that, Sloan teed off on Pelosi for having endorsed Representative Jack Murtha, the hawk turned Iraq war critic, in his fight against Representative Steny Hoyer to be the House Democratic majority leader, the powerful number-two job in the body. “Murtha has lots of ethics issues,” Sloan exclaimed. “What the hell is she thinking? Corruption turns out to be a major issue in the campaign, and you endorse the guy with the more ethics problems?”

Sloan was referring to exit polls that noted that 42 percent of voters considered corruption and congressional scandals critical to their voting decisions. And she pointed to her outfit’s Beyond DeLay site that lists the “20 Most Corrupt Members of Congress.” Murtha was not on that roster, but he garnered one of five “Dishonorable Mentions” (along with Republican Representatives Dennis Hastert, the outgoing speaker, J.D. Hayworth, who was defeated in Arizona last week, and Don Sherwood, who was accused by his mistress of choking her and who also lost his bid for reelection). END_OF_DOCUMENT_TOKEN_TO_BE_REPLACED

So what happened?  Why?  I admit that I don’t understand the true inside politics of the Democratic party.  Who is well liked and why?  Who has been supportive of Democratic policies and who hasn’t?

David Corn, Washington editor of The Nation, thinks that he might have the answer:

The vote count is in: Steny Hoyer defeated Jack Murtha 149 to 86 for the majority leader post in the House.

There’s no way to spin this: this was a big loss for incoming House Speaker Nancy Pelosi. The vote wasn’t close. Her ally was rejected. This reflects poorly on her. And it will be remembered by her political opponents–particularly those who want to undermine Pelosi’s efforts to enact lobbying and campaign reform–that in this contest she endorsed a fellow who has long been accused of slippery ethics.

Moreover, Murtha, the candidate with the most ardent antiwar credentials, lost–and did so decisively. How will this be interpreted (or exploited) by pundits and politicos who oppose the Pelosi/Murtha call for the withdrawal of troops? Murtha champions did try to turn the majority leader race into a debate on the Iraq war. Can the vote be read as an indicator that many House Democrats don’t support Pelosi all the way on her opposition to the war? more

David Corn is one of the brightest reporters that I have read.  I like his summary.  Only time will tell if he was correct. 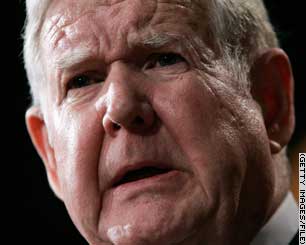 Rep. John Murtha, the anti-war congressman who is the likely new House speaker’s pick for majority leader, fended off what he called “swift boat-style attacks” on his ethics record Tuesday.

Rep. Nancy Pelosi, who as the House Democratic leader is in line to be the next speaker, has backed Murtha against Hoyer, who is currently the No. 2 Democrat in the House of Representatives.

Democrats are slated to vote Thursday on who will take the chamber’s leadership posts when the Congress reconvenes in January.

Hoyer insists he has commitments from a majority of the caucus. He picked up the public endorsement of a bloc of moderate Democrats on Tuesday.

The Maryland congressman also rebutted Murtha’s accusation that he backed the war, saying he has sided with Democratic calls for a “phased redeployment” of U.S. troops. more

I like Murtha’s thoughtfulness and fight.  So much for Democrats being pushovers.