Home » half a century

The GI Bill and Race

I didn’t know this.

Katznelson (author of When Affirmative Action Was White’: Uncivil Rights) reserves his harshest criticism for the unfair application of the Servicemen’s Readjustment Act, known as the G.I. Bill of Rights, a series of programs that poured $95 billion into expanding opportunity for soldiers returning from World War II. Over all, the G.I. Bill was a dramatic success, helping 16 million veterans attend college, receive job training, start businesses and purchase their first homes. Half a century later, President Clinton praised the G.I. Bill as ”the best deal ever made by Uncle Sam,” and said it ”helped to unleash a prosperity never before known.”

But Katznelson demonstrates that African-American veterans received significantly less help from the G.I. Bill than their white counterparts. ”Written under Southern auspices,” he reports, ”the law was deliberately designed to accommodate Jim Crow.” He cites one 1940’s study that concluded it was ”as though the G.I. Bill had been earmarked ‘For White Veterans Only.’ ” Southern Congressional leaders made certain that the programs were directed not by Washington but by local white officials, businessmen, bankers and college administrators who would honor past practices. As a result, thousands of black veterans in the South — and the North as well — were denied housing and business loans, as well as admission to whites-only colleges and universities. They were also excluded from job-training programs for careers in promising new fields like radio and electrical work, commercial photography and mechanics. Instead, most African-Americans were channeled toward traditional, low-paying ”black jobs” and small black colleges, which were pitifully underfinanced and ill equipped to meet the needs of a surging enrollment of returning soldiers.

Something as American as the GI Bill which acted as an economic stimulus for middle America was administered in a racial way. I think this is remarkable. This reminds us that race is an all-encompassing issue in United States. I thank Linda for pointing this out.

Update: This is Katznelson’s web site – Of the 3,229 GI Bill guaranteed home, business, and farm loans made in 1947 in Mississippi, for example, only two were offered to black veterans. At no other time in American history has so much money and so many resources been put at the service of the generation completing education, entering the work force, and forming families. Comparatively little of this largesse was available to black veterans. With these policies, the Gordian Knot binding race to class tightened.

President Barack Obama, from the transcript:

An earthquake and a hurricane may have delayed this day, but this is a day that would not be denied.

For this day, we celebrate Dr. Martin Luther King, Jr.’s return to the National Mall. In this place, he will stand for all time, among monuments to those who fathered this nation and those who defended it; a black preacher with no official rank or title who somehow gave voice to our deepest dreams and our most lasting ideals, a man who stirred our conscience and thereby helped make our union more perfect.

And Dr. King would be the first to remind us that this memorial is not for him alone. The movement of which he was a part depended on an entire generation of leaders. Many are here today, and for their service and their sacrifice, we owe them our everlasting gratitude. This is a monument to your collective achievement. (Applause.)

Some giants of the civil rights movement –- like Rosa Parks and Dorothy Height, Benjamin Hooks, Reverend Fred Shuttlesworth –- they’ve been taken from us these past few years. This monument attests to their strength and their courage, and while we miss them dearly, we know they rest in a better place.

And finally, there are the multitudes of men and women whose names never appear in the history books –- those who marched and those who sang, those who sat in and those who stood firm, those who organized and those who mobilized –- all those men and women who through countless acts of quiet heroism helped bring about changes few thought were even possible. “By the thousands,” said Dr. King, “faceless, anonymous, relentless young people, black and white…have taken our whole nation back to those great wells of democracy which were dug deep by the founding fathers in the formulation of the Constitution and the Declaration of Independence.” To those men and women, to those foot soldiers for justice, know that this monument is yours, as well.

Nearly half a century has passed since that historic March on Washington, a day when thousands upon thousands gathered for jobs and for freedom. That is what our schoolchildren remember best when they think of Dr. King -– his booming voice across this Mall, calling on America to make freedom a reality for all of God’s children, prophesizing of a day when the jangling discord of our nation would be transformed into a beautiful symphony of brotherhood. (more…) 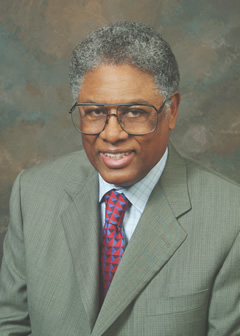 Thomas Sowell is not just any conservative syndicated columnist. He is also an economist and senior fellow at the Hoover Institute at Stanford University. Because this man happens to be black, I have received his same column titled “Random Thoughts” on three separate occasions. Unfortunately, this pile of non sequiturs and outright insults was not actually written by him. (Here is a list of his recent columns. Although 4 of them are titled “Random Thoughts,” none of them come close to this pile of garbage.)

There are about 20 or 30 emails that have been floating around the internet for approximately 18 months. They were all slanderous to Senator Barack Obama in one way or another. In this particular email, the author is saddened that General Colin Powell is not running for president instead of Barack Obama. Although Powell has served our country with bravery and distinction, he is also the same man who sat in front of the UN and spouted lies for over 30 minutes.

The author brings up the tired story of Jeremiah Wright once again. No other political figure, that I know of, has been asked to speak for his pastor. President George W. Bush is arguably the most religious president that we have seen in over a half a century. What church did he go to? Who was his pastor? We don’t know. We have no idea.

My mother has gone to a church in North Dallas for over 20 years. This church has had a series of pastors that range from nearly certifiable to truly honorable and religious men. I would hate for my mother or for me to be “linked” with some of those pastors. What is never been mentioned, or more correctly, rarely mentioned, is the fact that Jeremiah Wright has helped hundreds of young men and women. His church was revolutionary in the Chicago area in offering job training and also mentorship programs which introduced youths to some of the successful businessmen and women in the community. Jeremiah Wright served in the Marines and Army with distinction and honor but no one talks about that.

The list of insults continue. The partisan knucklehead who wrote this email brought up the saluting the flag issue, yet again. We know that Obama loves our country and salutes the flag. Actually, a civilian supposed to place their hand over their heart while saying the Pledge of Allegiance. The author of this email unfortunately doesn’t know that.

The author of this e-mail now turns his tirade into a full throated support of Sen. John McCain. John McCain is the same Sen. who did not support a holiday for Martin Luther King. He is the same Sen. who has voted against increased benefits for veterans including the recent G.I. Bill. The author, takes a big hit of what I imagine are Quaaludes or PCP, then is happy to endorse John McCain’s notoriously bad temper. For some reason, he/she thinks someone who is out of control, who loses rational thought, would be excellent at confronting the problems of the United States including North Korea, Venezuela and Iran. This may be the craziest thing in this e-mail. So this author endorses irrational behavior to confront irrational people. Has that approach ever worked? (I can tell you did doesn’t work in the ER with crazy patients.) This author needs to take a deep breath and stay on his prescribed medicines. It would seem to me that we, as Americans, we want someone who could rationally think through the multiple scenarios and responses to aggression from Iran, Russia or North Korea. When a gunboat in a Persian Gulf is barreling down on one of our warships, I want somebody who is cool, calm and collected. I want someone who will consider a full range of options everything from direct diplomacy to stealth bombers flattening Tehran.

The way we became the greatest country in the world was not through hair-trigger aggression. Instead we had a series of thoughtful, intelligent presidents who make the right decisions at the right time.

The author of the email then goes completely off the deep end. He starts talking about “towel headed morons.” Really? I’m not sure what name-calling really accomplishes. Doesn’t insulting their religion diminish our own? It sure seems that way to me. As I recall, the Ku Klux Klan tried to use the Bible to justify their white supremacist attitudes. Muslim extremists are using the Koran in the same way that the Klan used the Bible. Hundreds of thousands of men and women have died across the world because of religion or because of misinterpreting religion.

That’s my two cents. Please friends, don’t send me this article again, I’ll have to start taking antidepressants if I have to read one more time.