For more than 20 years we’ve heard about the greatness of Ronald Reagan and his economic policies. According to those who believe, everything was better under Ronald Reagan. The sunshine was brighter. Oranges were tastier. Jobs were more plentiful. People sang and danced in the streets as if in a musical. Well, the ’80s were good, but they weren’t great. 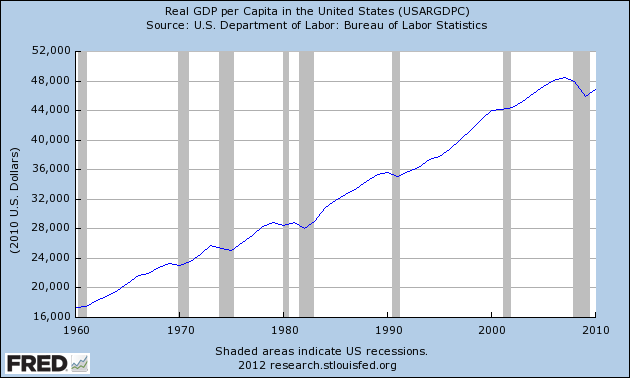 Yesterday, I revealed the unemployment rate over the last several decades. The one thing that jumps out is that during Ronald Reagan’s presidency the unemployment rate was higher than at any other time in the last 40 years. Conservatives continue to point to Ronald Reagan as an economic guru. So, I thought I would look up the GDP since 1960. Since our gross domestic product (GDP) is somewhat related to our population, it’s not fair to compare the GDP of the 1960s with the GDP of today. Our population is much bigger. Therefore, we should standardize GDP by looking at gross domestic product per capita. Also, we need to take inflation into account. So, this would be the real GDP. Finally, to make it fair, we should look at gross domestic product per year. Got it. Real GDP per capita per year.