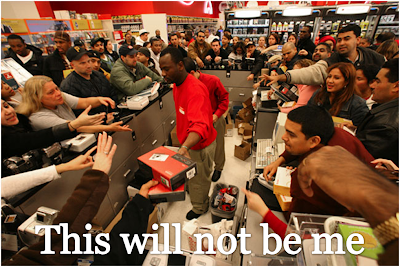 I was listening to the Bill Press Show on the way home (I was on call last night) and he had three topics for discussion. Black Friday: should we really be out shopping? Do you avoid politics over Thanksgiving dinner? Looking for peace in the Middle East. Black Friday is not about Christmas or the spirit of giving. It’s about large corporations figuring out a way to make huge sums of money. That’s it. The insanity of waking up and standing in line at 4 o’clock in the morning in order to get a deal on a Cabbage Patch doll or a G.I. Joe with a kung fu grip (from Trading Places) is ridiculous. I’ve seen people making $15,000 a year spending nearly 10% of their annual income on Christmas gifts. That’s not sustainable. When my siblings and I get together over the holidays, we will talk about everything. If my in-laws are there, that’s a little bit different. Let’s just say that my brother-in-law (well, all of my in-laws), up until recently thought that Glenn Beck was speaking the truth. My brother-in-law is a very smart guy. He longs for a time when things were simpler and easier to understand – the 1950s. As a rule, I avoid talking politics with him, but he has to bring up the subject. Then I approach it thoughtfully, carefully and in a nonconfrontational way. I only talk about subject where I know the facts. Finally, the Middle East. I don’t know what to say about that. I find the whole thing so disheartening.

The one thing that the General Petraeus scandal has told us is that all of your email is retrievable. If you’re saying things that you probably don’t want to read in court, then you probably need to take some sort of precautions.

When you don’t believe in government, it is really, really hard for you to make government work correctly. When you believe that government is the problem and never the solution, it is nearly impossible for government to work efficiently. A case in point is South Carolina. The government in South Carolina just got hacked. 3.8 million Social Security numbers were stolen. Why? The State Department of Revenue had crummy security.

Maybe South Carolina should have gotten some tips from Israel. As soon as hostilities increased, the state of Israel got hit by massive cyber attacks, 44 million separate cyber attacks. The government of Israel is still standing and the computers are still running.

Senator John McCain, who has led the charge in the Senate against the administration’s handling of Benghazi, is now flabbergasted, dumbstruck and stupefied. The Director of National Intelligence has stated that he removed the references to Al Qaeda in the initial reports as they were communicated by UN Ambassador Susan Rice. Here’s the problem. As I see it, who cares what it was called? It doesn’t matter whether within moments, days or even weeks we call these terrorist attacks or exuberant celebrations. What were the security protocols? Were they followed? I’ve yet to read anything significant or substantial on whether extra security was asked for in Benghazi. Was it? What was the administration’s response if there was such a request? As far as I’m concerned, this is a complete and total failure of the media. The media’s running around following Senator Lindsey Graham and Senator John McCain instead of giving us the background information that we truly need. They need to do some legwork.

Why is asking a simple question about science looked upon as a gotcha question? Senator Marco Rubio decided that he could not or should not answer the simple question concerning the age of the earth. This is a no-brainer, even if you are not a scientist. Biblical scholars thought that Galileo was a heretic in suggesting that the earth revolves around the sun. Now, Marco Rubio thinks that he would commit some sort of religious faux pas by stating that the earth is at least 4.5 billion years old. This underscores the stupidity of our political system. We’ve got to do better. We deserve better.