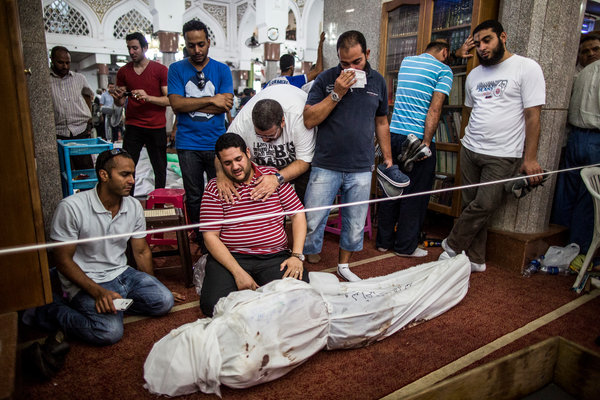 Over 500 people have died in Egypt. Over 3700 have been injured. President Obama made a statement earlier today. “While we want to sustain a relationship with Egypt, our traditional cooperation cannot continue as usual while civilians are being killed in the streets. The Egyptian people deserve better than what we’ve seen over the past several days.” As expected, President Obama stopped short of specifically stating that what is happening in Egypt is a coup. Yet, as the violence escalates, I believe we will have to, President Obama will have to, withdraw our $1.3 billion in military aid from Egypt. Look for Al Qaeda to try to exploit this. No matter what kind of diplomatic mumbo-jumbo comes out of the State Department and the White House, whatever’s going on in Egypt, it is clearly not a democracy.

Just to make sure that we know that George Will is still alive and kicking, he wrote one of the most unhinged, neoconservative pieces of gobbledygook that I’ve read in a while. Now, President Obama is worse than Nixon. Yes, he is talking about the Affordability Care Act. The fact that the administration stated that they’re going to wait a year before implementation represents an offense worse than Watergate. Nope, I don’t understand it either. Let’s be clear. Presidents have pushed the envelope of presidential power for as long as we’ve had a Republic. It is up to Congress and the Supreme Court to push back. Currently, we have a completely dysfunctional Congress. They can’t agree on what time of day it is, let alone whether something the president does is right or wrong. As usual, George Will is way off base.

Robert Reich continues to be one of the best progressive voices on the economy. The following is a presentation on income inequality. It is wonderful.

Just a couple of things

Charl Schwartzel wins the Masters. What? Who? Yep, old Charl played fantastically down the stretch. Several players were within striking distance. They were all bunched at 10 under par. Tiger is clearly getting his touch back. His putter failed him late, but he is striking the ball much better. Angel Cabrera was really close but his irons failed him late. Adam Scott played some great golf and had the lead very late into the round, but he just couldn’t hold it. Rory McIlroy had one of the biggest collapses that I have ever seen. I almost started crying. Seriously, a 21-year-old kid was leading the Masters after 63 holes and ends up with a triple bogey on 10,a bogey on 11, followed by a double bogey on 12. OMG. When he was playing his second shot on 10 from between some houses, I almost couldn’t look. This was the best golf tournament from an excitement standpoint that I have ever seen. Amazing and congrats to Charl Schwartzel.

This is nothing really new. The conservatives will pick a subject and then decide that this will be their Waterloo. This is where they draw the line. They shut down the government with this tactic during the Clinton administration. They were able to make the healthcare reform bill significantly more conservative with this tactic. Well, as it turns out, they aren’t going to spend any more money. The debt ceiling is their new line in the sand. Let’s see how this plays out politically. I think that it will sink the Republicans, who always seem to overplay their hand.

In mid-November, after the dust had settled from the midterm elections, incoming House Speaker John Boehner (R-Ohio) acknowledged that he’s well aware of the fact that his chamber is going to have to extend the federal debt limit. He noted that’s already “made it pretty clear” to his own caucus that Republicans are “going to have to deal with it as adults.”

Boehner added, “Whether we like it or not, the federal government has obligations and we have obligations on our part.”

Dealing with the debt limit “as adults” doesn’t appear to be going well. This morning, two right-wing lawmakers — Rep. Michele Bachmann (R-Minn.) and Rep.-elect Mike Kelly (R-Minn.) — reiterated their opposition to raising the debt limit on CBS’s “Face the Nation.”

Soon after, Sen. Lindsey Graham (R-S.C.) said on NBC’s “Meet the Press” that failing to raise the debt ceiling “would be very bad for the position of the United States in the world at large.” Graham, however, quickly followed that by saying he’s prepared to hold the debt limit hostage “until a plan is in place” for the nation’s long-term fiscal challenges that meets his satisfaction.

So much for dealing with this “as adults.”

The chairman of President Obama’s Council of Economic Advisers said today it would “insanity” for Congress to refuse to lift the nation’s debt ceiling, and that inaction would be “catastrophic” for the nation’s financial recovery.

“This is not a game,” CEA chairman Austan Goolsbee told Jake Tapper on ABC’s This Week. “The debt ceiling is not something to toy with.”

Over the past few weeks, several Republicans have followed the Tea Party’s lead in declaring that they will vote against any increase in the national debt ceiling. Today, on Meet the Press, Sen. Lindsey Graham (R-SC) drew a thick line in the sand, declaring, “I’m not going to vote for a debt ceiling increase unless we go back to 2008 spending levels, cutting the discretionary spending.”

On ABC’s This Week, conservative columnist George Will responded to Republican opposition to raising the national debt ceiling and the threat it poses to the fiscal solvency of the nation:

I know of no other developed nation that has a debt ceiling. This is a purely recurring symbolic vote to make people feel good by voting against it.

The trouble is it’s suicidal if you should happen to miscalculate and have all kinds of people voting against it as a symbolic vote and turn out to be a majority. Because if the United States defaults on its sovereign debt, the markets will be — well, it will be stimulating.