Caroline Kennedy has been out of the spotlight most of her life but, over the past six months, she has stepped up. She is visible and active in the Democratic Party. Below, you can see that she gives a great introduction for her uncle Ted Kennedy. 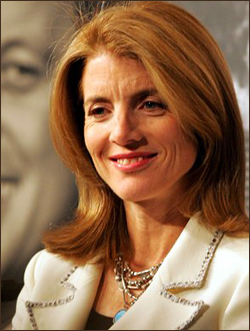 Now, this is news. There is no bigger Democratic political family than the Kennedy’s. For her to endorse Barack Obama is HUGE. Caroline Kennedy, the daughter of President John F. Kennedy, has an Op-Ed which will be published in the New York Times tomorrow morning.

Remember all of that yickity-yack about White women in American voting for Hillary Clinton.

In a decision she attributes to “patriotic, political and personal” reasons, former First Daughter Caroline Kennedy is endorsing Barack Obama for president.

In an op-ed in Sunday’s New York Times published on the paper’s Web site Saturday night, titled “A President Like My Father,” Kennedy writes: “It isn’t that the other candidates are not experienced or knowledgeable. But this year, that may not be enough. We need a change in the leadership of this country — just as we did in 1960….

(the following emphasis is mine)
“I have never had a president who inspired me the way people tell me that my father inspired them. But for the first time, I believe I have found the man who could be that president — not just for me, but for a new generation of Americans.” (more…)

OVER the years, I’ve been deeply moved by the people who’ve told me they wished they could feel inspired and hopeful about America the way people did when my father was president. This sense is even more profound today. That is why I am supporting a presidential candidate in the Democratic primaries, Barack Obama.

My reasons are patriotic, political and personal, and the three are intertwined. All my life, people have told me that my father changed their lives, that they got involved in public service or politics because he asked them to. And the generation he inspired has passed that spirit on to its children. I meet young people who were born long after John F. Kennedy was president, yet who ask me how to live out his ideals.  (more…)