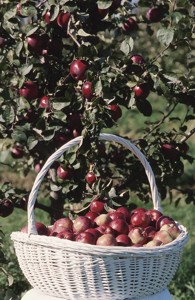 Scott McClellan, former Press Secretary under George W. Bush, wrote a book with a critical eye toward his the president.

McClellan’s mom, Carole Keeton Strayhorn, is well-known here in Texas because she has run for office as a a Democrat, Republican, and as a third-party candidate. Strayhorn served as Democratic Mayor of Austin and as a Republican Texas State Comptroller. She then ran for Governor in 2006 as an Independent against a Republican incumbent. She dropped and changed party affiliations to suit her ambitions.

If McClellan had a real problem with President George W. Bush, he could have resigned in protest.  Instead, he is making big money with a book. He has no loyalty to either President Bush or the American people.

Above you see a picture of some apples on a tree. This reminds us that the apples do not fall far from the tree. In this case, though, they are root and branch the same rotten fruit.

Here is what it says in Matthew about trees and the fruit they bear:

You will recognize them by their fruits. Are grapes gathered from thornbushes, or figs from thistles? So, every healthy tree bears good fruit, but the diseased tree bears bad fruit. A healthy tree cannot bear bad fruit, nor can a diseased tree bear good fruit. Every tree that does not bear good fruit is cut down and thrown into the fire. Thus you will recognize them by their fruits.

Here is some information about apple trees.