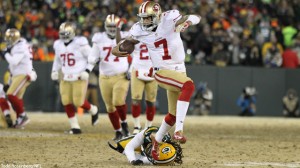 I know that it is in fashionable to suggest that there is a “New NFL.” Yep. New… not. There is nothing new. Wild Card Weekend proves that there is nothing new. Winning now looks a lot like winning ten or fifteen years ago. In order to win in the playoffs, you need to protect the football, run the ball and bring some defense. There is nothing new. This is exactly what we saw this weekend. In the Colts game, Luck and the gang were happy to turn the ball over but they also racked up over 500 yards in total offense. KC didn’t bring their defense. Actually, key guys got hurt during the game.

The new high-flying Eagles’ offense was shut down by the Saints. The Saints only allowed 80 yards on the ground and fewer than 260 yards in total offense. Yes, the Saints almost lost this game because of turnovers, but their defense bailed them out.

In the 49ers game, they simply brought their defense. The Packers were unable to do anything. Only 281 yards of total offense. The 49ers ran for over 160 yards.

Finally, the poor Bengals were unable to get out of their own way. They turned the ball over four times. They ran the ball for 113 yards. The SuperChargers had 196 yards on the ground. They had no turnovers.

The NFL is still about the same things that they were about. Winning in the playoffs is about running the ball, bringing a serious defense and NOT turning the ball over. It is that simple.

Amazing.  5 years after the President wanted Bin Laden dead or alive.  Bin Laden is still alive.  The president stopped talking about him.  He was only one man.  The president then “didn’t spend much time on him.”  Now, he (Bin Laden) is important again.

(sorry about the still photo.  I’ll try and fix it tomorrow.)

Terrible weekend of football. The Benagals folded. The Giants didn’t even show up. The ‘Skins winning a game with only 120 yards of total offense??? That’s offensive to me the viewer. Jacksonville almost showed up but not really.