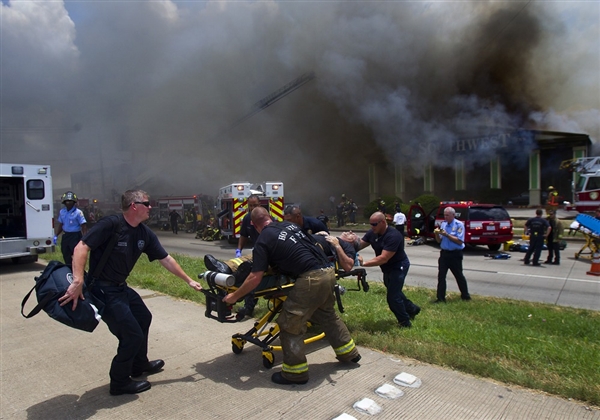 Four firefighters died – huge fire in Houston consumed a motel and a restaurant, causing the deaths of four firefighters. This is the deadliest fire (with regards to loss of firefighter life) in Houston’s 116-year history of the Houston fire Department. Very sad.

Car salesman has a deep conviction – Paul Scott is an average car salesman. He doesn’t make any more or any less money than any other average car salesman. Mr. Scott is going to pony up over $32,000 in order to have a brief conversation with the president at a fund-raising event. He wants to convince the president that electric cars are the way to go. He wants to personally pitch the president. Electric Cars. On one hand, I think this is very noble and thoughtful. On the other hand, Mr. Scott shows that he doesn’t really understand our political process. Even if he convinces President Obama that electric cars of the greatest thing since sliced bread, what then? Suppose the president and his advisors immediately sit down in the White House and create “the perfect” electric car legislation which requires parking lots with over 50 parking spaces to have electric car recharging centers. The legislation will also give tax rebates or tax credits to any parking lot owner who adds a recharging center. This supercharged legislation would give any American who buys an electric car from an American car company a $5000 tax deduction. Now, and here’s the important thing, the legislation goes to Congress, where it dies. There’s no way any kind of progressive legislation like this will get through the conservative House. I applaud Mister Paul Scott for putting his money where his mouth is. He is dipping into his savings in order to try to enact legislation and try to make the country a better place. Unfortunately, with a recalcitrant Republican Party, it will be difficult, if not impossible, to get this type of legislation through the Senate. I have a better chance of winning the lottery than this legislation has a chance of getting through the House. END_OF_DOCUMENT_TOKEN_TO_BE_REPLACED