capital of the united states

Home » capital of the united states

Funny if not true 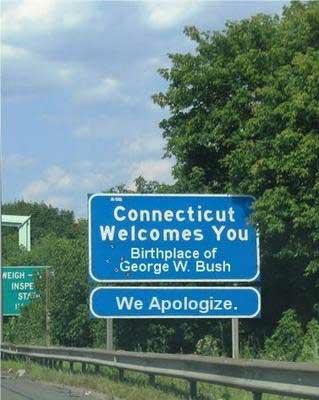 From Museum of Hoaxes:

The picture of this Connecticut highway sign has been circulating for quite a while, and it’s obviously photoshopped (Snopes has a picture of the non-photoshopped version, which lacks the phrases “Birthplace of George W. Bush” and “We apologize”… though their non-photoshopped version actually kind of looks like it’s been photoshopped). But apparently there really are signs outside of New Haven, Connecticut welcoming people to New Haven “The birthplace of President George W. Bush ’68.” George W was born there in 1946, while his father was attending graduate school there. I’m surprised no one has edited these signs to add a “We Apologize.” (Maybe they have and I haven’t heard about it.) Incidentally, New Haven’s other claim to fame is that it used to be the oyster capital of the United States.