What if Rape Is a Campaign Strategy? (Updated)

What if Rape Is a Campaign Strategy?

I’m just wondering if the Republican Party has decided that outrageous comments about rape is politically advantageous. The comments we are currently seeing cannot be spontaneous. They’re not being made by some country bumpkin running for city dogcatcher. Instead, these are serious candidates running for major offices (both Todd Akin and Richard Mourdock are running for US Senate in their respective states). Both of these guys have put in a lot of time. Both of these candidates have raised a lot of money. Both these candidates have been on the national stage with major political backing from the RNC.

Mourdock said, “I’ve struggled with it myself for a long time, but I came to realize that life is that gift from god. And even when life begins in that horrible situation of rape, that it is something that God intended to happen.”

Maybe there’s some polling hidden deep in some Republican’s file cabinet (Karl Rove) that suggests talking about rape in religious terms galvanizes evangelicals more than it repulses liberals and moderates. I don’t know. What I do know is that most of the things that are being said at the level of a U.S. Senate candidate is incredibly scripted. There are almost no spontaneous moments. Candidates are very cautious of what they say and how they say it. (Remember George Allen??) A misplaced statement here or there can mean disaster.

The main problem with Mourdock’s statement is that it is really the mainstream Republican position. Here’s what Jon Stewart has to said on the subject. 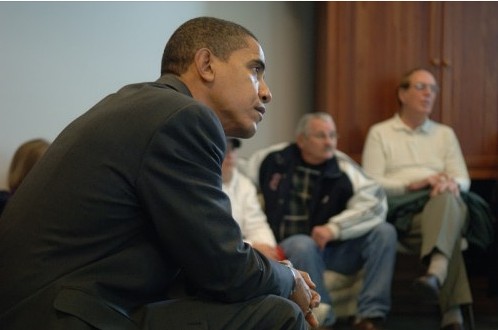 I’m reading Richard Wolffe’s article on Senator Barack Obama and his team in Newsweek. Wolffe is doing a good job in saying that Senator John McCain and Obama are getting ready to face each other. Obama is getting ready for an onslaught from the right. The article was going along nicely, until I get to this paragraph.

“The McCain campaign is now poring over Obama’s record, looking for weaknesses that can be exposed without race-baiting or hitting below the belt. They want to brand Obama as a “superduper liberal who is out of the mainstream,” says one McCain adviser who did not wish to be identified discussing internal campaign strategy.”

It is at this point I fall out of my chair laughing. Let me get this straight, Republicans are going to try to paint a Democratic candidate as liberal and out of the mainstream? Oh, and this is so top secret that the McCain adviser didn’t want to named. I’m still laughing.

In every major campaign from Maine to Florida and from California to Alaska, Republicans have tried to paint Democrats as liberals who are elitist and out of the mainstream. Geoffrey Nunberg, a linguist, wrote a great book in 2006 called “Talking Right: How Conservatives Turned Liberalism into a Tax-Raising, Latte-Drinking, Sushi-Eating, Volvo-Driving, New York Times-Reading, Body-Piercing, Hollywood-Loving, Left-Wing Freak Show.” Why would Richard Wolffe write about it as if it is a secret? This is standard operating procedure from Republicans. If a Democrat can’t fight off this now-lame and tired attack, he or she shouldn’t run for any office more important that dog catcher.