This goes very well with the previous post. New e-mails show that the White House and Alberto Gonzales have thrown up a smoke screen when they said that Harriett Miers was the first to mention that all 93 US Attorneys be fired.

You can read the e-mail for yourself here. Previous emails can be found here.

“Karl Rove stopped by to ask you (roughly quoting) ‘how we planned to proceed regarding US Attorneys, whether we were going to allow all to stay, request resignations from all and accept only some of them, or selectively replace them, etc.,'” Colin Newman, a staffer in the office of counsel to the president, wrote to a colleague.

The one-page document, which spans e-mails between the White House and the Justice Department in January 2005, also indicates Attorney General Alberto Gonzales was considering a range of options in dismissing U.S. attorneys early in President Bush’s second term. (more…)

This morning on Meet the Press, Former House Majority Leader Newt Gingrich says that we are at the beginning of World War III.  So, as the lone SuperPower whose responsibility would it have been to prevent WWIII?  Take your time.  Think about it for a minute… Israel, Palestine, Lebanon, Iraq, Iran and Syria.  Who had the power to qwell the violence. 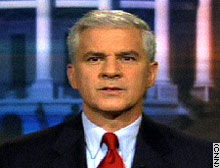 So, I had nothing to talk about this week.  Nothing at all…Well, there was the announcement by Sen. Santorum.  The House debates the Paris Hilton Tax.  Well, it wasn’t a real debate.  It was more name calling.  Nancy Pelosi and Rep Doggert (D-Tx) have some great things to say.  I interview Joseph Cirincione from the Center for American Progress.  He is a expert on nuclear weapons and terrorism.  He gives us the scoop on Sen Santorum and also announces the results of their Terrorism Survey.