FISA and the Telecoms, again 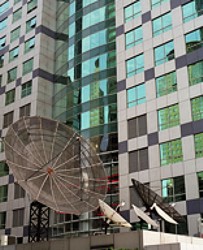 Every time that you think that this subject has been been beating down by the forces of good, then comes the forces of evil. A coalition of activists defeated the last effort of the Telecoms to get immunity. But that was then, this is yet another attempt to avoid lawsuits and possibly prosecution and jail time by the telephone companies. They unlawfully gave the Bush administration information that they should not have had. Information that may have been obtained with a court warrant but the Bush administration didn’t want to fool with anything as democratic as the courts.

Blogger Glenn Greenwald has been on this story for years. He has a great post on it. Here’s a small piece of his lengthy post (sadly, Democrats are as much to blame for the current push as Republicans, we have to push back.) –

It is now definitively clear that House Majority Leader Steny Hoyer is the driving force behind a bill — written by GOP Sen. Kit Bond — to vest the President with vast new warrantless eavesdropping powers and to vest lawbreaking telecoms with amnesty. Even as his office dishonestly denies that he is doing so, still more reports yesterday — this one from the NYT and this one from Roll Call (sub req’d) — confirm that a so-called “compromise” is being spearheaded by Hoyer and the House Democratic leadership. The ACLU and EFF are holding a joint call tomorrow to denounce Hoyer’s “compromise” as nothing more than disguised guaranteed immunity for telecoms and, further, because “the proposed deal could be used to authorize dragnet surveillance of Americans’ communications in violation of the Fourth Amendment.”

As a result, there is a major new campaign beginning today aimed at Hoyer and a handful of other key members of Congress who enable telecom immunity and warrantless eavesdropping. In order to raise as much money as possible for this campaign — far more than the $85,000 raised (and still being spent) in Chris Carney’s district as a result of his support for warrantless eavesdropping and telecom amnesty — we are working to create an alliance with numerous organizations and factions across the ideological spectrum which oppose civil liberties erosions, as well as with as many blogs as possible (modeled vaguely after the ideologically diverse alliance that has arisen in Britain in opposition to the sprawling and lawless surveillance state there). (more…)