One of the things that conservatives have said was that Obama was growing the government by hiring tons of public sector workers. This was not true and easily proven to be false. The following is from Calculated Risk Blog, who put together the numbers and the graphs. (There is no website that I know of that does a better job at giving us an overall picture of the economy.) 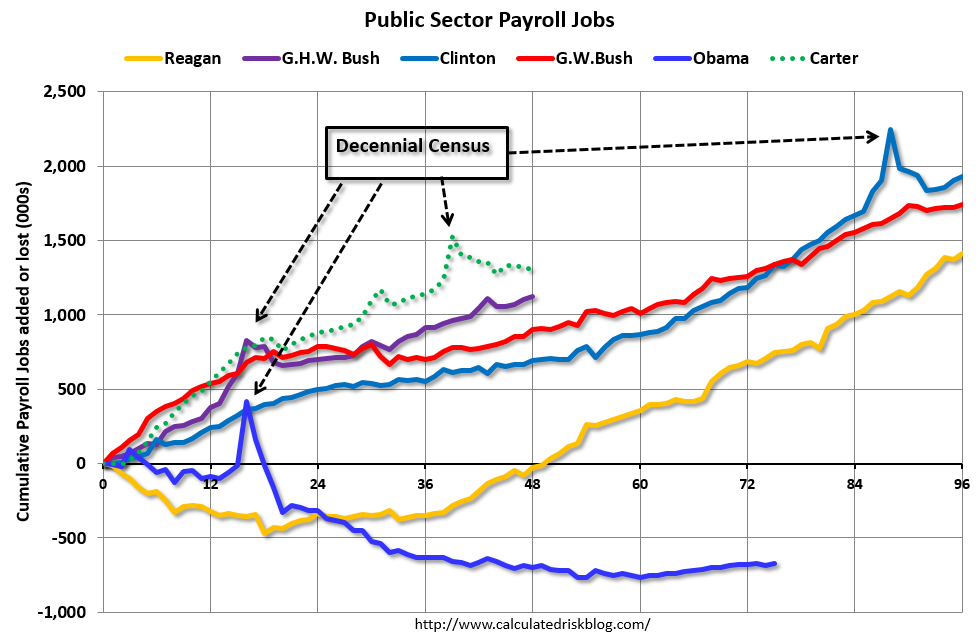 However the public sector has declined significantly since Mr. Obama took office (down 638,000 jobs). These job losses have mostly been at the state and local level, but more recently at the Federal level.  This has been a significant drag on overall employment.

Looking forward, I expect the economy to continue to expand through 2016 (at least), so I don’t expect a sharp decline in private employment as happened at the end of Mr. Bush’s 2nd term (In 2005 and 2006 I was warning of a coming recession due to the bursting of the housing bubble).

For the public sector, the cutbacks are clearly over at the state and local levels, and it appears cutbacks at the Federal level might also be over.  Right now I’m expecting some increase in public employment during Obama’s 2nd term, but nothing like what happened during Reagan’s second term.

Here is a table of the top three presidential terms for private job creation (they also happen to be the three best terms for total non-farm job creation).

Clinton’s two terms were the best for both private and total non-farm job creation, followed by Reagan’s 2nd term.

The second table shows the jobs need per month for Obama’s 2nd term to be in the top three presidential terms.