For the last several months, I have been invited to be a guest on Local Edge Radio with Blake and Lesley. I’m on a Thursda’s at 4 pm (EST). This week – we discussed how we aren’t moving forward as a country. We get distracted by mosques at Ground Zero and some preacher thinking about burning Korans. What’s up with Iraq? I’m having a problem with the idea that combat operations are over. They aren’t. We take a break then come back and talk about labor and how unions are dying. This show was fun. I hope that you enjoy it.

BTW, next Tuesday (9/14), @ 3 pm (EST) I’ll wipe the dust off of BlogTalkRadio. I’ll be back on the air (really I’ll be on the internet). My guest will be Markos Moulitsas founder of the Daily Kos. We’ll chat about his new book, American Taliban.

My special guests – Brian Katulis from the Center for American Progress, Middle East expert and Rick Newman, Senior Business Correspondent for US News and World Report.

I start the show by discussing healthcare. Since the discussion in Washington has become so confusing, I start at the beginning. I play a clip from Barack Obama’s news conference in which he lays out the facts of what happens if we keep the status quo. I think it is clear that the status quo will more than double our health care over the next 10 years. We know the statistics about bankruptcies and the crushing burden of healthcare on small businesses.

We need to do something different. The question is what? In my mind, in order to organize this process, I think it is important to lay out the goals. The goals that I have laid out for healthcare reform our portability, efficiency and cost effective. Many of the proposals that are currently floating around Washington are rearranging the deck chairs on the Titanic. The goals that I’ve outlined, in my opinion, are the minimum qualifications for healthcare reform.

Let’s simply look at the numbers. In 2007, we spent $2.2 trillion on health care. This averages out to approximate $7400 per American. Approximately $700 billion was spent on health insurance overhead. If the government takes the $700 billion and spends it on covering the 46 million Americans, we can do this and have money left over. We don’t need to inject any more money into the system. I then mention several ways that we can control costs. Finally, I discussed a few elephants in the room — immigration reform, which I think is intimately associated with health care reform and tort reform. One of the things that I didn’t mention, because of time, was that we should also look at Medicare and Medicaid fraud. How can we reduce the cheating in the system?

I chat with my special guest Brian Katulis, fellow at the Center for American Progress, Middle East expert. We begin the conversation by talking about Pakistan and what’s going on in Pakistan. We talk about this huge refugee crisis that has been caused by the military offensive against the Taliban. We also talk about the internal politics of Iraq and Iran. I appreciate Brian’s knowledge and his time.

I then talk to Rick Newman, Senior business correspondent for U.S. News & World Report. Malls. Rick has a series of columns on the health of our economy by looking at the health of several malls. Currently, malls are dying all across the United States. We talk about how we’ve got way too many retail stores and many of these malls are not going to survive this recession. We also discuss another one of his columns which focuses on several industries that are still don’t have a tough time even after the recession is over. This is a great discussion. I appreciate Rick’s insight into these topics.

This is a fun and informative show. Enjoy!

50 of the most powerful business women 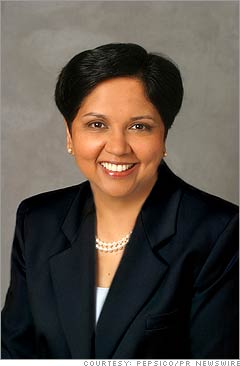 I’m out of town. I’m at a Surgery meeting. (high speed connection isn’t really high speed.  Therefore, it will be hard to post video until I get back home.)  There was a forum on diversity. Then I found this article. I have to admit that I didn’t know half of the people on the list. I didn’t know that woman is the head of PepsiCo. I need to read more business journals.

Indra Nooyi – All the arrows are pointing in the right direction, with revenues ($35.1 billion), operating profits ($6.4 billion), and earnings per share ($3) all rising strongly last year. The 2001 Quaker Foods acquisition, in which Nooyi played a key role, is working out well, and Pepsi International, a priority for the company and a particular interest for the Indian-born Nooyi, is coming on strong too; its revenues rose 14%, to $13 billion, and operating profits rose 21%, to $1.9 billion. Oh, and in May, Nooyi added the title of chairman to her own portfolio.