Republicans are always trying to get us up in arms over something. They don’t want us to sit down and calmly think about things. Instead they want to hit that nerve. They want us to have the knee-jerk reaction. They want us to be outraged, fearful and moved to action. Yesterday, it was death panels. Today, Czars.

From The Political Animal:

The right-wing drive to target the Obama administration’s use of “czars” seems to be catching on among Republican lawmakers. On Fox News yesterday, Sen. Lamar Alexander (R-Tenn.) said the president’s use of czars is “an affront to the Constitution.”

I did some research last night, trying to find examples of Lamar Alexander criticizing the Bush administration’s use of czars. After all, Bush/Cheney not only kept some of the czars left over from the Clinton and the H.W. Bush administrations, but also oversaw the creation of a “food safety czar,” a “cybersecurity czar,” a “regulatory czar,” an “AIDS czar,” a “manufacturing czar,” an “intelligence czar,” a “bird-flu czar,” and a “Katrina czar.” If Alexander is concerned about this “proliferation” of czars, surely he raised some concerns during the previous administration.

Except he didn’t. As far as I can tell, Alexander never said a word. Apparently, Republican czars are fine; Democratic czars are un-American. Just because. Good to know.

I think I have a solution to this meaningless dust-up: stop using the word “czar.” It’s a meaningless word, anyway. It’s not as if there’s a single person in the executive branch with the word “czar” in their formal title — it’s just a colloquial political euphemism.

I Drill, You Drill, We All Drill in ANWR 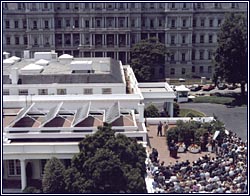 I was recently sent an email arguing for for drilling in ANWR. This email dovetails very nicely into a recent Republican strategy which can be summed up in a phrase: drilling our way out of the oil crisis.

For everyone over the age of 25, we’ve been here before. In late 1970s, as oil prices began to skyrocket, we had a debate in this country over oil and energy independence. Our president at the time was Jimmy Carter argued for conservation. Carter and a Democratic Congress who pushed for higher fuel standards in cars. He asked Americans to turn down thermostats. He even had a fireside chat from the White House wearing a sweater. He argued for development of alternative energy. President Carter went so far as to put solar panels on the White House.

Since 1980, we lived under a Republican dominated government. President Reagan could not wait to take down solar panels. There was no push from the Reagan administration or either of the two Bush administrations for conservation, for higher fuel standards or for developing alternative energies. Instead, slowly but surely, we’ve injected more and more of our money into oil technology. The pinnacle of the strategy was for the current Bush administration to actually give our tax dollars to the “failing” oil industry. The results of these policies is nothing short of déjà vu all over again. We are currently in another oil crisis. We have the opportunity to either learn from the past or to push America back into oil dependence.

I’m not an energy expert but I do know that we have to decrease our dependence on oil. I guess there are two ways to look at this. We can either wean ourselves off of our dependence or we can stop cold turkey. It is hard for me to understand how drilling anywhere, whether in northern Alaska or off our shores, will help us reach our goal of energy independence from the Middle East (remember they are the guys that hate us). Instead, more drilling seems to be the equivalent giving just “a little bit” of heroin to a heroin addict.

Either through regulation or through tax incentives, we have to encourage business to pump tens of billions of dollars into developing alternative energies. There won’t be one simple solution. Instead, there should be multiple solutions to our energy problem. In some areas of the country solar panels make sense. In other areas of the country, wind power and tidal power may be the answer. As far as nuclear energy, I think France has shown that nuclear energy can be done safely. My problem with nuclear energy is that we end up with radioactive waste that will decay over thousands of years. We, as a country, have not decided what to do with this nuclear waste. Nobody seems to want it in their backyard. Therefore, until the problem of how to dispose of nuclear waste is decided, it seems reckless to build more nuclear reactors.