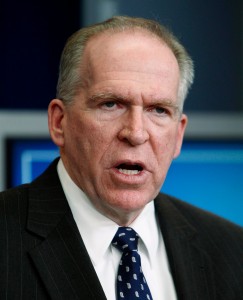 Yesterday, John Brennan was confirmed by the Senate to become the director of the CIA. This whole brouhaha over John Brennan, national security, drone attacks, Benghazi and the like should seem very familiar to you. This is almost exactly what we went through just a couple weeks ago with Chuck Hagel. Republicans were mad. They were furious. They demanded answers from the Obama administration. They were gonna block this nominee at all costs. Yet, in the end, nothing changed. Best I can tell, the White House did not fork over any mysterious, all-telling documents. There were no significant policy changes. Nothing. Both John Brennan and Chuck Hagel were confirmed. What we did see was the internal struggle within the Republican Party. They simply don’t know who they are. END_OF_DOCUMENT_TOKEN_TO_BE_REPLACED

Last night, Rachel Maddow took her opening segment and simply roasted and toasted Mitt Romney. My question is why?

You do not have to be a political junkie, as I am, to be able to understand that Mitt Romney has changed his position on several major issues. The healthcare law that he instituted in Massachusetts is basically the same law that President Obama tried to institute across the United States. This is a fact. Yet, somehow Mitt Romney has tried to parse this into something that it isn’t. If you remember that whole brouhaha over whether Mitt Romney really hunts or not and what he hunts, well, that was craziness. That was not some tricky question. Instead, that was Mr. “I’m awkward” Romney just trying to fit in. He doesn’t. He’s uncomfortable in crowds. He’s uncomfortable talking in front of people. Yet, here he is, running for president.

I love Rachel Maddow. I think she is the brightest woman on television. I just don’t understand what is to be gained by telling liberals, her audience, that Mitt Romney is who we think he is. I’m just saying. Okay, Mitt Romney has proven over the last several years that he will do anything, say anything and be anybody in order to become president. Okay, now it’s out there.

Update: Yesterday on NPR they introduced a segment by asking the question, “How would President Romney handle Afghanistan?” What? President Romney? A chill went up my spine. Now, I understand what Rachel was talking about. Think about it. President Romney. He can’t settle on one position for anything. Even Clinton was better at standing firm than Romney. There is almost no subject in which Romney hasn’t changed his position in some sort of major way. So, Romney on Afghanistan? My goal is for us, the American people, not to go through a Romney presidency. The fact that he is talking about doubling down, no, tripling down on Afghanistan…doesn’t make any sense to me. We need to get out. We need to leave a force that is large enough to crush any terrorist camp or outpost that pops up. That’s it. We need to come home. I’m not sure what Romney’s position is and whatever it is I suspect that it will change… with the wind.

The thing that I find funny about this whole brouhaha over religion is that religious freedom is an individual right. Religious freedom is not a corporate right. The Obama administration was asking corporations, not people, to cover contraceptives. They were asking that they cover contraceptives, not abortion. Yet, we had this explosion because there was a “war on religion.” Nothing could be further from the truth. As far as I know, you can still worship anywhere you want to. You can be Catholic, Jewish, Protestant, Mormon, whatever, without the government telling you how to practice your religion. Jon Stewart had more to say on the subject:

Republicans, as usual, are trying to seize the day and the moment. Republicans are now willing to wage a fight over birth control. I wish them luck. It seems to me that birth control has been the greatest invention of the last 60 years. Women no longer have to worry about having a baby every time they have sex.

Mitt Romney is in a world of trouble. Several months ago, I mentioned both on my blog and on the air that Mitt Romney had a problem with the Republican Party. They simply didn’t like him that much. The fact that he was barely able to eke out a victory in Maine and the conservatives in Maine thought that Ron Paul would make a better president (he only lost by a few percentage points) should be somewhat disturbing to the folks who have supported Mitt Romney. The latest polling shows Mitt Romney to be in a dead heat with Rick Santorum in Ronmey’s home state of Michigan. Whatever Romney is doing to win this nomination isn’t working.

Moody’s may cut the AAA rating for Great Britain and France.

The Economic Policy Institute has clearly shown that public school teachers and other government employees do not have lavish compensation packages.

One of the ways that Fox news has been so successful is that they will say something that is so outlandish and so ridiculous that most Americans will ignore it. Then, they will keep saying it over and over again and, after a time, whatever it is doesn’t sound quite so outlandish anymore. Fox news contributor Liz Trotta stated that women serving alongside men in the armed services should expect to be raped. Expect to be raped? What a reactionary moron!! I hate name-calling but I can’t think of anything else to say. Women should never expect to be raped. Never. Men and women in the armed services are expected to follow a code of conduct, no matter who they are, no matter where they are. It is that simple. Reactionary knuckleheads should not make excuses for people who do not follow a simple code of conduct and decency. I feel that I should smack this women in the face for saying something so over-the-top, but I won’t, because I too have a code of conduct.

I have wanted to link to this story for the last several days. It’s a story about the intern that was seduced by JFK. I simply found it interesting.

The chaos and violence are continuing in Syria. Russia and China could help work to end the bloodshed, but they seem to be unable to understand that it is possible that we, the United States, are completely right in this case.

President Obama continues to push for the payroll tax cut. It makes sense. It will help the American people and the economy. Opposing it really doesn’t make sense.

What stories are you following? What’s on your mind?