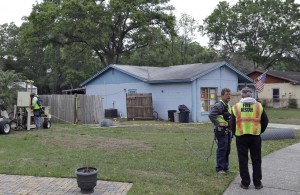 I was at an airport yesterday and on the TV came this story:

This is the worst piece of journalism that I have ever witnessed. This man has just lost his brother and you are going to interview him? For what? What thoughtful, intelligent insight would he have? Just to be fair, CNN couldn’t resist either.

I am not a geologist and I do not have any specific insights into sinkholes. I know if I was living in the neighborhood, I would be packing up my things and moving. I have no idea if the ground surrounding a sinkhole is stable or not. My condolences to the family of Jeff Bush, the man who fell into the sinkhole. My heart goes out to them.

The Guys at Car Talk call it quits I have listened to Click and Clack, the Tappit brothers (Tom and Ray Magliozzi) for years (decades, really). For the most part, my cars have worked over those years, but I listen for the laughs. They simply made their shows enjoyable. They laughed at each other and at the goofy situations that their callers could find themselves in. They were smart and witty. They were/are the best that radio has to offer. Well, they have called it quits. Personally, I will miss them. No, I didn’t listen every week, but I did smile or laugh out loud every time I did listen. Here’s what they placed on their web site.

RAY: Hey, you guys. My brother has always said, “Don’t be afraid of work.”

From the Chicago Tribute

A federal jury today convicted former Gov. Rod Blagojevich on 17 of 20 counts, finding he brazenly abused the powers of his office in a series of attempted shakedowns captured on undercover government recordings.

Blagojevich showed no reaction as the jury announced their decisions. Once the verdicts were read, he sat back in his chair with his lips pursed, looked toward his wife Patti and whispered, “I love you.”

As the first guilty verdict was read, Patti Blagojevich slumped into the arms of her brother, who stroked her head. She kept shaking her head “no” as the jurors left the courtroom, and once the judge was gone, the former governor grabbed his wife’s right hand and hugged and kissed her.

Blagojevich spoke only briefly as he and his wife left the federal courthouse. “Patti and I are obviously very disappointed,” he said at a bank of microphones. “I frankly am stunned.”

Blogojevich spoke briefly as he and his wife left the federal courthouse. “Patti and I are obviously very disappointed,” he said at a bank of microphones. “I frankly am stunned.” The two then walked to a waiting car as some in the crowd booed. (more…)