It seems to me that there’s more going on with Hamas in the Gaza Strip the meets the eye. I don’t understand the strategy of lobbing missiles into Israel. What were they hoping to accomplish? Were they thinking that they had improved relationships within the Arab world? Will their Arab neighbors like Egypt come to the rescue? That simply doesn’t make any sense to me. None of this makes any sense, unless Hamas was trying to lower Israel into a ground war. Maybe Hamas has obtained chemical or biological weapons from Iran. Maybe Hamas wants to sucker the Israelis into making some major error which would cause an enormous number of Israeli casualties. I don’t know. It simply doesn’t make any sense.

There are several things that need to be reformed in our government. In no particular order – we don’t need a debt ceiling. It has become a political hot potato in which Republicans can rail on about how much money the government is spending. Election reform is mandatory. We need some sort of national standards for elections. It doesn’t make sense that it took me seven minutes to vote (including time chatting with the folks working at the polling station) and other Americans spent more than seven hours in line waiting to exercise this basic civic duty. The filibuster in the Senate also needs to be rethought and revised. As of now, simply threatening to filibuster causes legislation to be derailed; therefore, almost everything requires sixty votes in order to pass.

As our population gets larger, the percentage of Americans who are mentally ill, confused, upset, angry and otherwise disaffected becomes larger. Well, the percentage is about the same, but the numbers are larger. I think that’s what we saw in Oakland, California yesterday.

The suspect in a shooting rampage at an East Oakland private university told investigators he was angry at a female school administrator and students, saying they teased him and “were not treating him respectfully,” Police Chief Howard Jordan said Tuesday.

The suspect, One Goh, admitted his involvement in the Monday shooting and told investigators that one female administrator in particular at Oikos University was the object of his fury, police said.

Jordan, speaking early Tuesday, would not identify the administrator but did say she is not among the injured. “We don’t believe that any of the victims were the ones that teased him.”

March was a good month for the auto industry. They continue to rebound.

An inventor sues British Petroleum for stealing his inventions, which seem to have helped plug one of the gushing wells.

I know that many people have pointed out Paul Krugman’s article called Pink Slime Economics. I have to take just a couple of minutes and highlight this excellent column. This is a must read –

But we should not allow events in the court to completely overshadow another, almost equally disturbing spectacle. For on Thursday Republicans in the House of Representatives passed what was surely the most fraudulent budget in American history.

And when I say fraudulent, I mean just that. The trouble with the budget devised by Paul Ryan, the chairman of the House Budget Committee, isn’t just its almost inconceivably cruel priorities, the way it slashes taxes for corporations and the rich while drastically cutting food and medical aid to the needy. Even aside from all that, the Ryan budget purports to reduce the deficit — but the alleged deficit reduction depends on the completely unsupported assertion that trillions of dollars in revenue can be found by closing tax loopholes.

And we’re talking about a lot of loophole-closing. As Howard Gleckman of the nonpartisan Tax Policy Center points out, to make his numbers work Mr. Ryan would, by 2022, have to close enough loopholes to yield an extra $700 billion in revenue every year. That’s a lot of money, even in an economy as big as ours. So which specific loopholes has Mr. Ryan, who issued a 98-page manifesto on behalf of his budget, said he would close?

None. Not one. He has, however, categorically ruled out any move to close the major loophole that benefits the rich, namely the ultra-low tax rates on income from capital. (That’s the loophole that lets Mitt Romney pay only 14 percent of his income in taxes, a lower tax rate than that faced by many middle-class families.) Many, many years ago, I was out in the Pecos wilderness with several of my classmates. We found out, first-hand, what happens when you stir up a hornet’s nest. We were walking down this trail single-file. All of us were city slickers and most of us did not really appreciate being out in the woods. Therefore, we really were paying attention to our surroundings. Suddenly, one guy grabbed his leg and ran off the trail screaming in pain. A few seconds later, the guy behind him did exactly the same thing. It turned out there was some sort of hornet’s nest in the middle of the trail. The first two or three guys walked down the trail that the hornets stirred up. The middle of the group got stung. Those of us who were lagging behind saw the commotion and took a different path. In the end, everybody was fine, with the exception of a few stings. In this highly charged political atmosphere, one would figure that a major fund raising foundation would steer clear of hornet’s nests. Not the Susan G Komen Foundation for the Cure. On Tuesday, they decided, for purely political reasons, to stop funding Planned Parenthood. There was significant blowback. Today, they are in 100% damage control mode and almost  reversed their decision. This was a major announcement that did very little to guarantee future funds for Planned Parenthood. 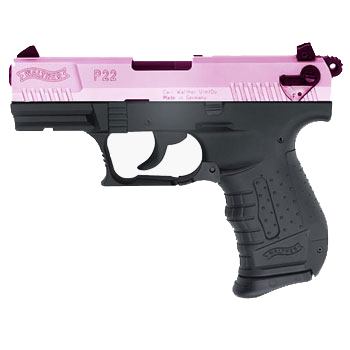 We needed a pink gun, did we??

We live in an era in which nothing is exactly as it seems. Just a couple of years ago, the average American thought that British Petroleum really cared about the environment. They had a charm offensive which included more than five years of commercials filled with environmentally friendly talk. It only took one oil well and a completely tone deaf CEO to show America that British Petroleum was no different than any other major oil corporation. The Susan G Komen foundation had completely infiltrated the American psyche. They equaled breast cancer awareness and treatment. Even the NFL had one game where players would support the Foundation by wearing pink shoes or pink gloves or even have pink towels hanging from their waist. Personally, I have purchased golf balls, baseball caps and other merchandise which sported the Susan G Komen logo and supported breast cancer awareness and treatment. I have personally given money to people who have run in their multiple, well-publicized, “race for the cure” over the years. Now, that’s not happening. Millions of Americans have the same feeling. It will take Susan G Komen foundation years to recover from this strategic blunder.

In my opinion, the Board of Directors needs to clean house. The power structure of the Susan G Komen foundation needs to be fired. New management needs to be brought in if they are to convince the American public that they truly understand what the problem is. In my opinion, today’s announcement tells me that they know what the problem is, but that they don’t really want to fix it. Personally, it’s going be hard for me to pony up money to the Susan G Komen foundation ever again. I’ve already donated to Planned Parenthood, which I’ve never done in my life. I plan on making it a habit.

The Daily Kos has done an excellent job covering the to and fro of this debacle. Please check out their many posts here, here and here. Marcy Wheeler, fabulous blogger and personal friend, has an excellent post here. You can give to Planned Parenthood here.

Update: This is what anyone would describe as a bizarre episode in PR. This case just gets stranger. Ari Fleischer, Bush’s former press secretary, raises his ugly head. This just gets crazier and crazier. Komen has not been officially labelled a partisan, dead organization. I don’t see how the Susan G Komen foundation will be surviving this.

Here’s what I think is very sad about this whole ordeal. Women need an organizational advocate to raise huge sums of money to combat breast cancer. The advocate must be non-partisan and focus like a laser on breast cancer research and on helping women.

I thought that this graphic would be helpful.