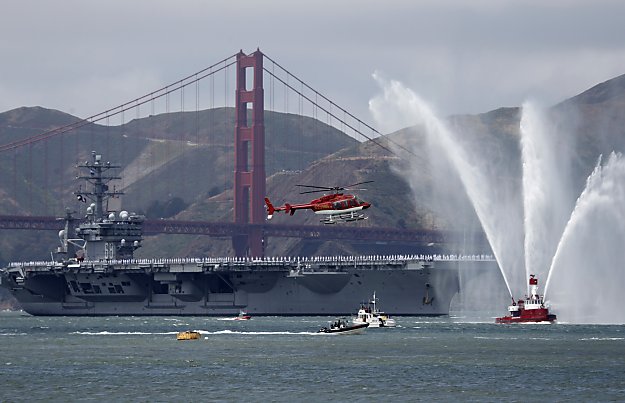 from the San Francisco Chronicle

The Golden Gate Bridge turns 75 years old this weekend. When somebody or something reaches one of these milestones it is time to reflect. If we needed to build something like this bridge again, could we? Would the building of such a bridge become mired in partisan politics? I know we can build bridges to nowhere, but have we lost the capacity of actually helping the American people? 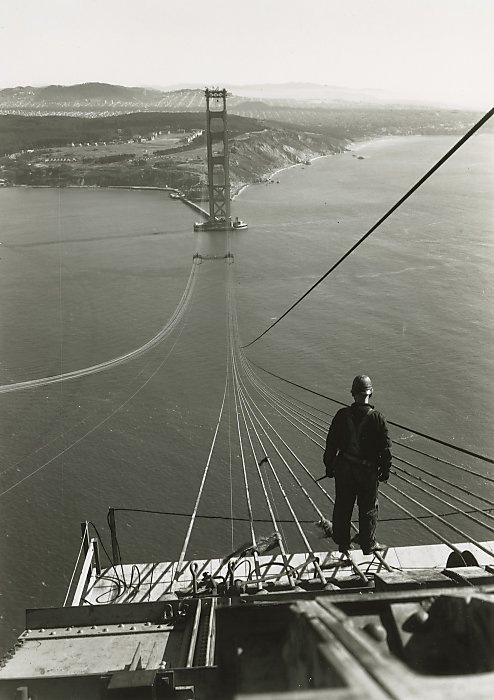 Golden Gate being Built in 1936

France knows how to throw a party, but this party seems to have gotten out of control. The NATO summit has been surrounded by violence.

Black-clad protesters attacked police and set a customs station ablaze Saturday on a bridge linking France and Germany that served hours earlier as the backdrop for a show of unity by NATO leaders.

AP photographers saw other protesters storm a nearby Ibis hotel, setting fires and pilfering alcohol from its bar.

Stacks of old tires were also set ablaze, unleashing thick plumes of black smoke that could be seen from across the river. Near the bonfire was a sign welcoming visitors to Strasbourg. (more… )

My father was fond of asking me if everyone was jumping off a bridge, would I jump. The right answer was always no.

Senator John McCain, in a very weak economic speech, offered voters a gas -tax holiday. In my opinion, this was a terrible idea. First of all, it would be difficult for the IRS to enforce a tax that is turned on then turned off. Secondly, it isn’t like gas prices would drop immediately although the public would expect gas prices to drop any day. Many Americans would start driving more, which would increase demand and therefore increase prices. Also, this tax holiday would increase the federal deficit by $11 billion with no clear benefit to anyone. Finally, gas tax money does go to fund highway projects. If we take that money away, aren’t we going to have to stop some projects and therefore fire some workers?

For reasons that are unclear to me, Hillary Clinton wasted no time in jumping on this bandwagon. The only difference is that Senator Clinton plans to pay for the budget short-fall with wind-fall profits taxes.

Senator Barack Obama has spoken out against the tax holiday. He believes we need a better solutions than a short term fix. Here’s Obama’s new ad. I like it and I agree this holiday is a bad idea.