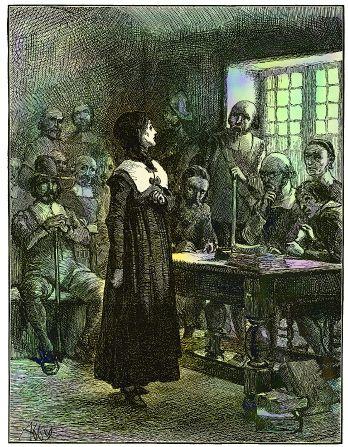 The core of the story is that Mrs. Hutchinson held that neither church nor state was needed to connect a believer to his or her God.

As you might imagine, this assertion was a threat to the rulers of Massachusetts Bay Colony. In Massachusetts, church and state were intertwined and the average colonist was expected to adhere to established orthodoxies.

Mrs. Hutchinson was termed a “leper” and banished to Rhode Island in 1638. There she worked with Roger Williams who had also been exiled from Massachusetts.

Given the difficulty in taking a hard stand that exists to this day, it’s nearly impossible the imagine the type of personality and the extent of courage it took for a woman to risk banishment in a wilderness nearly 400 years ago.

Mrs. Hutchinson gave birth to 14 children. Her husband, a cloth merchant, was said to have been supportive. To what extent he was supportive, I do not know.

The above picture is of Mrs. Hutchinson facing trial for her views in Massachusetts. The painting was done by Edwin Austin Abbey.