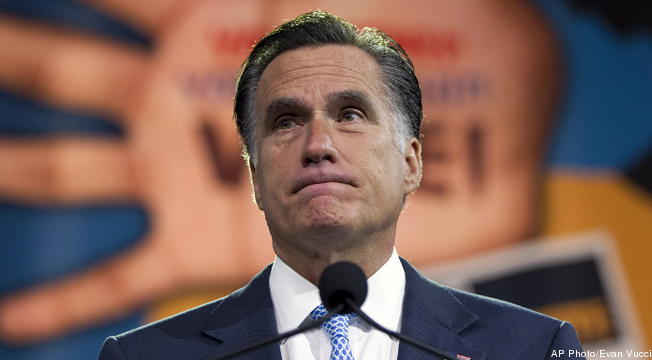 The problem for Mitt Romney is that some of the techniques that were used at Bain Capital just don’t sit well with voters. Voters love successful businessmen. Voters don’t care so much for businesses that seem to have manipulated the tax code. Voters don’t care so much for businesses that ship jobs overseas in order to make more profit. These are facts. So, what Mitt Romney has tried to do, like all politicians, is to play both sides of the fence. He wants all the notoriety and adulation for being a successful businessman, but does not want to take any of the blame for some of the business techniques that voters don’t like. This is why it becomes critically important to find out when Mitt Romney severed ties with Bain Dapital. Was it in 1999? Or was it some time later?

In 2002, a Boston Globe article quoted a former Bain Capital executive named Marc B. Wolpow who said Mr. Romney remained in a very active role at Bain Capital while he was supposedly on a leave of absence for his Senate race. Wolpow specifically said of Romney’s role, “I reported directly to Mitt Romney…. You can’t be CEO of Bain Capital and say, ‘I really don’t know what my guys were doing,'” END_OF_DOCUMENT_TOKEN_TO_BE_REPLACED 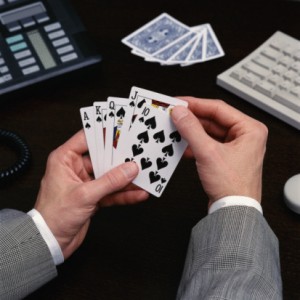 Continuing my discussion on race – over the past week, I’ve been trying to logically discuss race, as I see it, in America. (here, here and here) For me, the discussion started when I found out that a 17-year-old young man named Trayvon Martin was shot and killed by George Zimmerman. The tragedy of this incident cannot be overstated. I started talking about this tragic incident little over a week ago. Now, the mainstream media has picked up the story. Charles Blow, one of my favorite New York Times writers, has picked up the story. In one of his strongest paragraphs he asks, “Why did Zimmerman find Trayvon suspicious? Why did he pursue the boy when the 911 operator instructed him not to? Why did he get out of the car, and why did he take his gun when he did? How is it self-defense when you are the one in pursuit? Who initiated the altercation? Who cried for help? Did Trayvon’s body show evidence of a struggle? What moved Zimmerman to use lethal force?” I don’t know what the right answer is in this case. I won’t pretend to know. What I do know is that a 17-year-old young man is dead. From the facts presented in this case, there’s no good explanation why. Was it race? I don’t know. The family wants and needs answers.

I talked about Eric Perez and Amando Dialo. I talked about their tragic deaths. There are probably hundreds of others. I then dove headfirst into the arrest of Professor Henry Louis Gates. One of the side stories that surrounded the rest of Professor Gates had to do with a police officer named Justin Barrett. Justin Barrett had nothing to do with the arrest of Professor Gates, but sent a ugly, despicable e-mail to the Boston Globe. I found the e-mail extremely interesting. It was laced with racist rhetoric. What was going through his mind as he was typing this e-mail? Why would a police officer, who thinks of himself as a fair-minded person and states outright that he is not a racist, write something like this? I think that this is critically important to understanding how ingrained race is in our society. Basically, his e-mail stated that if Professor Gates did not comply with every one of his commands, immediately, then the suspect deserved to be sprayed in the face with pepper spray for his “belligerent noncompliance.” The e-mail is fascinating. It is about power. It is about respect. It is about overwhelming force when the power of the police aren’t met with immediate submission.

I talked about the overwhelming economic data which clearly shows that Blacks continue to fall behind Whites. Finally, there’s an interesting graph that I posted on the incarceration rates. Over the past 30 years incarceration rates are slowly rising among Blacks, Whites and Hispanics. But when you look at the graph, you see a dramatic increase in incarceration rates among Black high school dropouts between the ages of 20-34. Why? No other racial group shows this type of increase.

This brings me to the criminal justice system. Bill Quigley, Legal Director Of the Center for Constitutional Rights and Professor of law at Loyola University in New Orleans, has written the following summary which I think is extremely insightful:

One. The US has seen a surge in arrests and putting people in jail over the last four decades. Most of the reason is the war on drugs. Yet whites and blacks engage in drug offenses, possession and sales, at roughly comparable rates – according to a report on race and drug enforcement published by Human Rights Watch in May 2008. While African Americans comprise 13% of the US population and 14% of monthly drug users they are 37% of the people arrested for drug offenses – according to 2009 Congressional testimony by Marc Mauer of The Sentencing Project.

Three. Since 1970, drug arrests have skyrocketed rising from 320,000 to close to 1.6 million according to the Bureau of Justice Statistics of the U.S. Department of Justice.
African Americans are arrested for drug offenses at rates 2 to 11 times higher than the rate for whites – according to a May 2009 report on disparity in drug arrests by Human Rights Watch.

Five. Once arrested, 80% of the people in the criminal justice system get a public defender for their lawyer. Race plays a big role here as well. Stop in any urban courtroom and look a the color of the people who are waiting for public defenders. Despite often heroic efforts by public defenders the system gives them much more work and much less money than the prosecution. The American Bar Association, not a radical bunch, reviewed the US public defender system in 2004 and concluded “All too often, defendants plead guilty, even if they are innocent, without really understanding their legal rights or what is occurring…The fundamental right to a lawyer that America assumes applies to everyone accused of criminal conduct effectively does not exist in practice for countless people across the US.”

Six. African Americans are frequently illegally excluded from criminal jury service according to a June 2010 study released by the Equal Justice Initiative. For example in Houston County, Alabama, 8 out of 10 African Americans qualified for jury service have been struck by prosecutors from serving on death penalty cases. (more…)

So, we have a justice system that seems to be biased against minorities. We also have economic data showing that minorities with the same training and/or the same level of education take home less money. Blacks have far less wealth than their White counterparts. So, when you step back and look at the system as a whole, what can you say about America? Can you say that we live in a colorblind society? What are your thoughts? 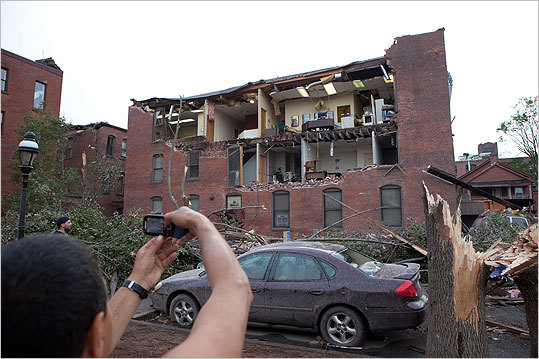 Although tornado alley is not specifically defined, I think of it as the area of northern Texas, Oklahoma, Kansas, southern Missouri, northern Louisiana and western Tennessee. Texas, Oklahoma and Kansas report the most tornadoes of any state in the union. Although tornadoes can form almost anywhere, is very unusual to see a tornado as far north as Massachusetts. Yesterday, four people died in a tornado outbreak in Massachusetts. I have no idea if they have tornado warning system like they do on the South.

From the Boston Globe:

Tornadoes tore through Western and Central Massachusetts yesterday, killing at least four people, injuring an untold number, and reducing schools, churches, and homes to splinters along its destructive path.

Governor Deval Patrick declared a state of emergency throughout Massachusetts and ordered up to 1,000 troops from the National Guard to help with rescue efforts. He said at least 19 communities had reported damage and he asked officials in those towns and cities to close schools and keep nonemergency personnel home today to allow work crews to clear streets.

“We are in an emergency situation,’’ said the governor in a news conference at the state’s emergency management headquarters in Framingham. He said there had been reports of looting in Springfield, and he described the damage from the storm as extensive.

“We are hoping and praying and working as hard as possible to keep the fatalities limited to those four’’ already confirmed, he said.

“We’re accustomed to seeing one to three tornado warnings or watches a year,’’ said Scott MacLeod, a spokesman for the state agency. “This is not a regular natural hazard we’re faced with in Massachusetts. This is absolutely very serious.’’ (more…)