I originally posted this back in October 2006.  I thought it would be nice to re-post it.  I understand that this original video is hard to find.  I guess you just need to know where to look.

The following is the old post.  Remember Bob Ney?  He was kind of like Mark Sanford.  He was a disgraced politician except he kept his pants on, as far as I know.  😉

No not Bob Ney.

Remember when Michael Jackson was an entertainer and not a child molester? Remember when you simply couldn’t wait until his next video would come out? In his day, he was as good as they got. Smooth Criminal, like many of the videos and music that Michael Jackson did back then, broke new ground. The visuals were awesome. The video was part of a larger movie. Anyway, that was a long time ago. Bush I was in the White House. Iraq hadn’t been invaded once. We were friends with Osama Bin Laden and were still fighting the Soviet Union. Wow, that really was a long time ago. 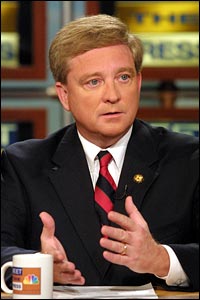 Well, I’m sure that this looks good for the Republicans also.

Rep. Bob Ney pleaded guilty Friday in the Jack Abramoff influence-peddling investigation, the first lawmaker to confess to crimes in a scandal that has stained the Republican-controlled Congress and the Bush administration.

Standing before Judge Ellen S. Huvelle, Ney pleaded guilty to conspiracy and making false statements. He acknowledged taking money, gifts and favors in return for official actions on behalf of Abramoff and his clients.

The 52-year-old lawmaker faces a maximum of 10 years in prison. Huvelle said prosecutors had agreed to recommend a term of 27 months, and said federal guidelines suggest a fine of between $5,000 and $60,000.

Ney did not immediately resign from Congress, and within minutes, Republican and Democratic leaders vowed to expel him unless he steps down. more