American people seem to want something different from what the GOP is pushing.

From Capital Gains and Games:

A June 9 Washington Post/ABC News poll found that 61 percent of people believe higher taxes will be necessary to reduce the deficit.

A May 26 Lake Research poll of Colorado voters found that they support higher taxes on the rich to shore-up Social Security’s finances by a 44 percent to 25 percent margin.

A May 13 Bloomberg poll found that only one third of people believe it is possible to substantially reduce the budget deficit without higher taxes; two thirds do not.

Some are calling the survival of 155 passengers a miracle. Maybe. I think that a well-trained pilot with a well-trained crew flying a well-designed airplane should be able to safely land a damaged plane. This is why we train. We train for emergencies. I’m glad that everyone is safe.

All 150 passengers and 5 crew members aboard a US Airways flight bound for Charlotte, N.C., escaped safely minutes after the plane took off from LaGuardia Airport and then plunged into the icy Hudson River.

Moments after the pilot of the plane, a twin jet Airbus A320 bound for Charlotte, N.C., glided the aircraft to an emergency landing on the river, a veritable flotilla of small craft converged on the crippled plane and began rescuing the freezing passengers who had gathered on the wings.

“It would appear the pilot did a masterful job of landing in the river and making sure everybody got out,” Mayor Michael R. Bloomberg said at an early evening news conference. “I had a long conversation with the pilot, he walked the plane twice and made sure that everybody was out.”

The pilot was identified as Capt. Chesley B. Sullenberger, III, 57, of Danville, Calif.

Some of the passengers were taken to hospitals in New York and New Jersey. Several were treated for hypothermia and a variety of mior injuries. It was one of the coldest days of the year in New York City, with the air temperature in the 20s, the wind chill making it feel like 11 degrees, and the water temperature in the Hudson about 40 degrees. (more… ) 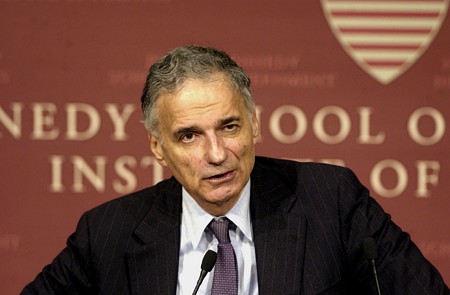 I’m sorry. I couldn’t even blog on Ralph Nader. He’s a good man with good ideas but he has no chance of being elected. None. I think that Mike Gravel has more of a chance than Ralph Nader.

For Progressives that have feared an independent getting into the race, stop whining. Focus on the task at hand. Focus on nominating someone who will unify the country. Focus on someone who shares our values. Focus.

In other news, Michael Bloomberg with his Billion dollar portfolio, has decided not to run for president. Bloomberg is an interesting guy. He was a democrat then he became a republican. Now, he is an independent. What is he looking for? He says solutions. Well, I think that you can look for solutions without joining every club in town. I think that Bloomberg is an opportunist. This is what has made him a successful business man. This is what has made him mayor of New York.

Mr. Bloomberg writes in an op-ed in the NYT today (see below) that he is NOT running for president. Does that mean that he thinks that the candidates are too strong for him to beat? Yes, yes, I know. He says that the candidates aren’t covering the “real” issues. We have heard that before. I can tell you that we have had serious candidates talking about serious issues but you can not present a 30 minute policy speech to the American public and expect that they are going to pay attention. Get real.  Bloomberg is an opportunist who saw no opportunity to win no matter how much money he threw at this goal.
—————

I believe that an independent approach to these issues is essential to governing our nation — and that an independent can win the presidency. I listened carefully to those who encouraged me to run, but I am not — and will not be — a candidate for president. I have watched this campaign unfold, and I am hopeful that the current campaigns can rise to the challenge by offering truly independent leadership. The most productive role that I can serve is to push them forward, by using the means at my disposal to promote a real and honest debate.

In the weeks and months ahead, I will continue to work to steer the national conversation away from partisanship and toward unity; away from ideology and toward common sense; away from sound bites and toward substance. And while I have always said I am not running for president, the race is too important to sit on the sidelines, and so I have changed my mind in one area. If a candidate takes an independent, nonpartisan approach — and embraces practical solutions that challenge party orthodoxy — I’ll join others in helping that candidate win the White House. (more…)