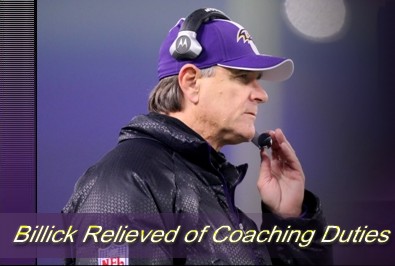 In the era of parity, the quarterback is the one position that you have to have a superstar.  Brian Billick, former coach of the Baltimore Ravens, was fired because the Ravens had a terrible season this year.  I would say that he was fired because Steve McNair was injured most of the season.  McNair, when he was healthy, was an excellent quarterback.  Also, the Ravens won the Superbowl in 2000.  What major changes had the Ravens had over the last 6 years on defense?  My answer is none.  They lost great guys and replaced them with okay guys.  Ray Lewis was injured a good part of the season.  Ed Reed had an off year.  So without a great defense the offense needed to pick it up.  They weren’t able to carry the load.

Finally, I would have fired Billick years ago.  He was supposed to be an offensive genius. I never saw it.  Not in Baltimore.  The Ravens needed a little offensive magic or genius in the second half while they were playing the New England Patriots.  Their offense completely collapsed in the second half of that game.